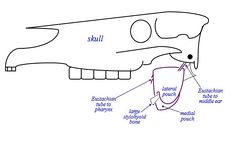 The Guttural Pouch is present only in members of the order Perissodactyla (nonruminant ungulates: horses, tapirs, rhinoceros) and another small band of small mammals including Hyraxes, certain bats and a South American mouse.

The guttural pouches are paired ventral diverticulae of the eustachian (auditory) tubes, formed by escape of mucosal lining of the tube through a relatively long ventral slit in the supporting cartilages. The auditory tube connect the nasal cavity and middle ear and the diverticulum dilates to form pouches which can have a capacity of 300-500ml in the domestic horse. The pouches are normally air filled.

The Guttural Pouch is located below the cranial cavity, towards the caudal end of the skull/wing of atlas. It is covered laterally by the Pterygoid muscles, parotid and mandibular glands. The floor lies mainly on the pharynx and beginning of the Oesophagus. The medial retropharyngeal lymph node lies between the pharynx and ventral wall of the pouches.

Right and left pouches are separated dorsomedially by rectus capitis ventralis and longus capitis muscles. Below this, by fused walls of the two pouches, the median septum is formed.

Each pouch is moulded to the stylohyoid bone which divides the medial and lateral compartments, the medial compartment being approximately double the size of the lateral one and extends further caudally and ventrally.

The guttural pouch has close association with many major structures including several cranial nerves (glossopharyngeal, vagus, accessory, hypoglossal), the sympathetic trunk and the external and internal carotid arteries. The pouch directly covers the temporohyoid joint. The pouch has an extremely thin wall which is lined by respiratory epithelium which secretes mucus. This normally drains into the pharynx when the horse is grazing.

Several cranial nerves and arteries lie directly against the pouch as they pass to and from foramina in the caudal part of the skull (vessels within mucosal folds that indent the pouches):

Cranial nerve VII - limited contact with the dorsal part of the compartment.
External carotid artery crosses the lateral wall of the lateral compartment in its approach (as maxillary artery) to the atlas canal. The external maxillary vein is also visible.

Natural drainage of the pouch is throught the slit-like (pharyngeal) openings of the eustachian tube in the lateral wall of the nasopharynx. The connection opens when the horse swallows and grazing normally provides drainage. However, most of the pouch is ventral to his slit, and therefore drainage may be rather ineffective. If blocked, secretions accumulate and the pouch distends producing a palpable swelling.

The function of guttural pouches is largely unknown, however hypotheses have been put forward: