From WikiVet English
(Redirected from IgA)

Immunoglobulin A
Jump to navigation Jump to search 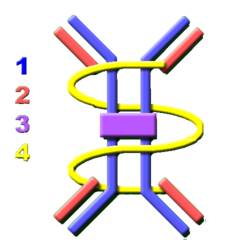 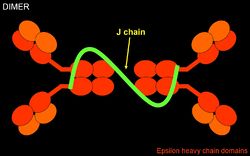 IgA is a dimeric immunoglobulin that is produced by the joining of two IgA monomers by a ‘J’ chain. Its heavy chain is type alpha(α). There are two types of IgA:

Type 1 - Non-secretory and found in blood.
Type 2 – Secretory and secreted on mucosal surfaces.

Salivary IgA is produced by plasma cells in connective tissue around salivary glands. IgA in the alimentary system is produced by plasma cells in the lamina propria. It is the only Ig that can cross into the lumen of the alimentary tract. During lactation, the levels of IgA increase so that it becomes the predominant immunoglobulin in the milk (more than IgG). Mucosal epithelium have a “poly Ig receptor” and this bind to the J chain on the IgA, and allows IgA to travel across the cell. IgA crosses the cell in a transport vesicle and is released by exocytosis.

IgA binds to antigens and prevents agents from adhering to the epithelium, and as adhesion is a prerequisite to establishing infection, it prevents infection. Agents include toxins, bacteria, viruses, fungi and parasites. As IgA resists proteolytic digestion, it is able to function well in the gut, although some bacteria have proteases to overcome this resistance. IgA is a "non-inflammatory" isotype, as it does not activate complement by the classical pathway, and has no role in opsonisation. This helps to preserve the mucosal integrity and function. Ruminant mucosal IgG subclass similarly is also a poor complement activator.