From WikiVet English
Complement
Jump to navigation Jump to search

Complement is so called because it complements the function of antibody. It is a triggered enzyme cascade and there are more than 20 different proteins in the complement cascades, with most being enzymes or pro-enzymes. It can be activated by both the innate and adaptive immune systems and is one of the main innate protective mechanisms of invertebrates. Due to its destructive potential the complement system is heavily regulated but when activated it works largely by forming pore complexes as well as triggering acute inflammation and by promoting phagocytosis by macrophages and neutrophils. 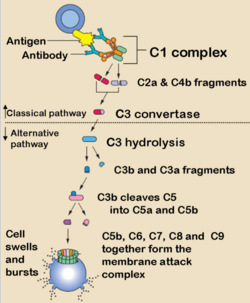 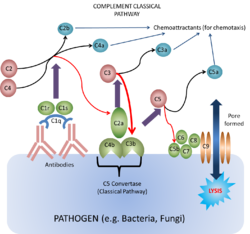 This pathway of the complement system is triggered by the binding of antibody to antigen. The only subclasses that can activate complement this way are the IgM and certain IgG. The first step of complement activation is the binding of C1 to two Fc regions of the antibodies (IgM is such a strong activator of complement as it contains five Fc regions, while IgG contains one). C1 is actually a complex of C1q, C1r and C1s. C1q looks like a bunch of 6 tulips with each "flower" consisting of a globular protein head and a collagen "stem". C1q is required to trigger the cascade because two of its globular heads bind to the two Fc regions. C1r and C1s then become activated when the C1q heads are antibody-bound. When they are activated they form the enzyme C1 esterase (it is a serine protease).

It is the C1 esterase which then first digests components C4 to C4a and C4b, and C2 to C2a and C2b. It is the C4b which first binds to the antigen, and then forms a complex with C2a (some textbooks (tend to be more recent) quote this as "C2b" depending on nomenculture used) to produce the active enzyme C3 convertase (classical pathway). The binding of one C1q molecule produces one C1 esterase molecule that can then cause the binding of many hundreds of the C4b¯2a molecules (or in some textbooks "C4b¯2b"). The role of the convertase is to digest C3 into C3a and C3b. This part of the pathway is self-propagating as the production of C3b can now be amplified by the same mechanism as the alternative pathway (below).

The main action of the C3b molecule is to form the C4b¯2a¯3b complex, or the C5 convertase (classical pathway). The C5 convertase then activates C5 and initiates the membrane attack complex (MAC) as shown below. Other actions include the fragmentation of the C3b due to the actions of Factors I and H which forms C3bi (C3bi and iC3b are the same protein, different name), which provides an opsonin for phagocytosis.

Along with the actions of the fragments mentioned above, Ca fragments C3a, C4a and C5a, and Cb fragment C2b also form a chemotactic response. This brings neutrophils to the area of complement activation through the process of extravasation through the increase in cell adhesion molecules on the endothelium and an increase in vascular permeability; and chemotaxis which is the direct cellular movement. The fragments can also cause mast cell and basophil degranulation. These therefore induce acute inflammation. 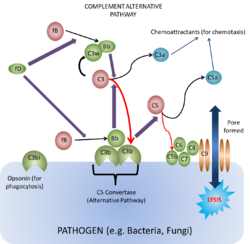 This pathway is found in all animals, including those that do not have antibodies i.e. animals lower in order than cartilaginous fish. It was discovered after the classical pathway and was thus called the 'alternative pathway'.

To begin the cascade C3b binds to a surface that stabilises the C3b. C3b can bind to any surface as it has a binding site that anchors it to any surface, however it is only the surfaces of certain activators that can stabilise the otherwise short-lived C3b in the absence of antibody. These include Gram-negative bacteria, yeasts and fungi. When the active C3b is bound to particle surfaces, it is protected from inactivation by another complement component, properdin. Therefore, having the C3b bound to a surface enables the C3b to become active for longer. The C3b can then bind Factor B producing the complex C3bB. While in this complex, Factor B can become a substrate for the plasma enzyme known as Factor D. Factor D then splits a small peptide (the Ba peptide) from Factor B to generate the C3 convertase (alternative pathway) made of C3b¯Bb.

This C3 convertase (C3b¯Bb) then acts on C3 to generate more C3b to then generate more C3b¯Bb: This process enables an efficient positive feedback loop that propagates the response. The C3b¯Bb can also bind C3b to form C3b¯Bb¯3b which itself is a C5 convertase and is one of the two enzymes that activates the membrane attack complex (MAC). This occurs in the same way as the clasical pathway, with the C5 convertase splitting C5 into C5b, that activates the complex, and C5a, the potent chemoattractant.

At the same time as C3b¯Bb¯3b is being formed, Factors I and H are acting to breakdown C3b to iC3b which, as mentioned above, forms an opsonin for phagocytosis. 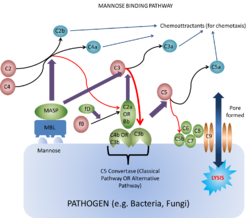 Lectins are proteins that bind carbohydrates e.g. collectins. They bind the carbohydrates as they have a terminal mannose residue, and are therefore called mannose-binding lectins. These are secreted by the liver into plasma. 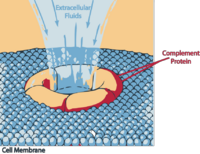 This is the lytic pathway of complement function and can be initiated via either C3b¯Bb¯3b or C4b¯2a¯3b. These split C5 into C5a which is pro-inflammatory, and C5b, the first molecule of the MAC (very short-lived and biologically active).

To prevent inappropriate activation of the complement system there is a range of control mechanisms/compounds.

Is both secreted onto and present on cell membranes and hastens the degradation of C1 esterase. Exerts control on the classical pathway.

Factors I and H

Break down C3b and controls positive feedback by inhibiting C3b¯Bb thus preventing the complement cascade from running to exhaustion each time it is activated.

Is present on many cell types especially erythrocytes and functions to bind C3d (the breakdown product of C3b) resulting from the action of Factors I and H. It binds potentially inflammatory immune complexes in plasma and these are then transported to the liver where they are phagocytosed by the hepatic macrophages and removed.

This binds the first molecule of C9 when it inserts into a cell membrane and prevents the polymerisation of C9 and therefore pore formation and cell lysis. It acts as a protective mechanism for the host cells.

Once activated the complement system deposits a shell of protein on the bacterial cell surface. C4b, C3b, C5b and C7 molecules contain active binding sites that anchor the complex to the surface and the major protein on the cell surface is iC3b (also known as C3bi) (some of the smaller C3 breakdown products (e.g. C3d) are also present).

The smaller complement peptides are very efficient at inducing inflammation i.e. C3a and C5a. They attract granulocytes to the site of complement activation as well as stimulating their degranulation.

The components (C5 – C9) can kill pathogens directly by causing cell lysis. This is effective against encapsulated bacterial infection like Neisseria and Meningococci.