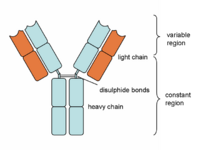 Immunoglobulins (Ig) are the soluble form of B cell receptors (BCR) released by plasma cells after they have been activated. Immunoglobulins have to bind to a number of different antigens in a variety of environments and as such there are several different immunoglobulin classes. Each class has an optimum environment of action. 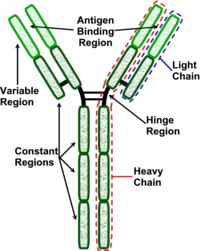 Antibodies are "Y-shaped" and consist of two identical heavy (H) chains and two identical light (L) chains with each H chain being linked to an L chain. The heavy chain consists of 4 or 5 protein domains, 1 amino terminal variable domain and 3 or 4 constant domains. Each light chain has one variable and one constant domain. Each arm of the molecule consists of one L chain and part of an H chain and there are two identical antigen-binding sites on each antibody molecule, one at the tip of each arm. The binding sites are made up of a combination of the variable domains of 1H and 1L, although single cells only have receptors of one specificity. The antigen binding site of an antibody is determined by a combination of the amino acid sequence of both the heavy and light chain variable domains (VH and VL). Antibodies of different specificities have different amino acids within one of three regions of the variable domains and these are called the hypervariable regions. The variable domains are folded in such a way as to form a pocket into which antigens fit. The constant domains do not bind antigen, although they determine the biological functions of the antibody molecules.

At the carboxyl terminus of B-cell expressed Ig is a region that holds the antibody molecule in the cell membrane. Secreted 'free' antibodies do not possess this region. The Fab fragments of the immunoglobulin is the antigen binding fragment generated from the light chains when digested by papain (proteolytic enzyme). The Fc fragment is the fragment produced by papain from the heavy chains and this fragment mediates phagocytosis, triggers inflammation, activates complement and targets Ig to certain tissues.

Antibodies form part of the adaptive immune response. For further information on the adaptive immune response, see here. All antibody classes bind antigen in a similar manner; the initial trigger for all antibody function is the association of antigen with the antigen-binding sites of the immunoglobulin molecules. However, different classes serve different physiological functions and functional differences between antibody classes are reflected in the structural differences in their heavy chain constant regions. These heavy chain regions comprise the effector domains of antibody molecules. In general antibodies have four major effector functions:

This action of antibody binding to antigen is a protective function. Antibody may bind to biologically active sites on toxins, inhibiting their binding sites. In a similar manner, antibody can bind the surface of viruses and prevent them from infecting cells. Antibody molecules are at least divalent, and many are greater than divalent which means that antibody can cross-link antibody forming an antibody agglutination. The ability to cross-link or agglutinate can be the primary function of the antibody. In order to be pathogenic, many micro-organisms must be able to contact viable host cells. If antibody molecules agglutinate these micro-organisms, any cell contact is prevented and the pathogenic effect is removed or reduced. The main biological function of IgA is to cross-link potentially pathogenic molecules.

Antibodies also have a function to facilitate phagocytosis. Phagocytes have receptors for the Fc portion of antibody, using Fc receptors (FcR). FcR bind the Fc portion of antibody on antigen/antibody (Ag/Ab) complexes, although the antibody alone does not interact with FcR. Interaction of FcR with Ag/Ab complexes stimulates cellular activation which greatly increases the efficiency of phagocytosis. This process is called opsonisation. Opsonisation promotes the production of intracellular enzymes and therefore promotes the killing and digestion of internalised micro-organisms. Systems used by phagocytes that are important in intracellular killing include free radicals such as oxygen and chlorine, hydrogen peroxidase and nitric oxide produced by nitric oxide synthase. Ultimately phagocytes undergo degranulation resulting in the secretion of certain enzymes and cytotoxic molecules. These systems are also activated by the interferons, especially the immune interferon, interferon gamma (IFNγ). Antibody-mediated opsonisation of micro organisms is much more efficient that innate immune system receptors. Phagocytes also have receptors for iC3b, a complement component which is also a major initiator of opsonisation. Two particulary important phagocytic cells that have FcR are the neutrophils and macrophages.

Antibodies play an important role in the innate immune response to parasites. The Eosinophils and Mast Cells have FcR that are specific to IgE. When the IgE are cross-linked by antigen the eosinophils and Mast cells can interact with the IgE causing the release of their granules through the process known as exocytosis (granule fusion with the plasma membrane). This causes proteolytic enzyme release from eosinophils, and vasoactive peptide and cytokine release by Mast cells which then activates the innate immune response. Interestingly, this response is also responsible for the Type I hypersensitivity reaction.

Cross-linking two Fc regions of IgM and IgG by complement component C1q begins the classical complement pathway. As IgM has five Fc regions it is a much better activator of complement than IgG (as IgG only has one Fc region).

There are five classes of Immunoglobulins, which vary due to the composition of their heavy chains. These are common across mammals but subclasses of them do vary between species. IgY is present in yolk.

Subclasses of the five major classes also exist. These occur in the heavy chains and are coded for by the IGH gene. For examples horses have six subclasses of the IgG immunoglobulin coded for by the genes IGHG1→ IGHG6 while cattle and sheep only have three subclasses (IGHG1→ IGHG3). Therefore within the IgG class there are several subclasses depending on the species. Humans and rodents have four IgG subclasses, dogs have three subclasses, ruminants have two or three subclasses and in some species there are also two IgA subclasses. Antibody specificity is unrelated to class. Different classes of antibody can be associated with the same V domains and have the same specificity. It is possible for a single B-cell to produce antibody of one specificity but two or more classes. A mature B-cell has the genetic capacity to produce antibody of all classes and subclasses but of one specificity only.

Allotypes are differences in immunoglobulins between individuals of a particular species. They are inheritable. Idiotypes are variations in the sequences of amino acids in the variable regions of the light and heavy chains.

Different classes of antibody differ from each other in size, charge, amino acid composition, associated carbohydrate and function. Immunoglobulin heavy and light chains are encoded by separate genes with the first 300 bases of each gene encoding the variable part of each protein chain. The combination of the VH and VL contribute to the antigenic specificity and any individual has the capability of producing over 100 million different antibody specificities. The rest of the antibody gene encodes all the constant domains. There are five different types of heavy chain constant domains - μ, γ, ε, α. Different heavy chains are associated with different classes of antibody;

In humans and mice there exists a fifth Ig class, IgD (δ chain). IgD is always expressed on B-cell membranes with IgM but is never secreted. The sequence of constant region genes on the chromosome is M, G, E and A. In humans/ rodents the Cδ (IgD) is immediately downstream of the M gene and prior to antigenic stimulation, B-cells express cell membrane-associated IgM.

The first immunoglobulin produced during an immune response is always IgM because the Cμ gene is the first constant H chain gene downstream of the variable domain. After antigenic exposure the IgM+ B-cells differentiate and begin to synthesise other classes of immunoglobulin, but only under the direct influence of a T-cell. This system is known as immunoglobulin heavy chain switching. The IgG antibodies produced in both primary and secondary responses originate from the same clones of B-cells as the IgM antibodies. The different antibody classes have the same variable domain combinations, and therefore the same antigenic specificity. Under the influence of T-cells, B-cells undergo immunoglobulin heavy chain switching and the B-cells mature from IgM to IgG producers, with IgE and IgA producers generated under certain immune responses. These immunoglobulins (IgA and IgE) tend to be produced within lymphoid tissue associated with mucosal surfaces.