From WikiVet English
Neutrophils
Jump to navigation Jump to search 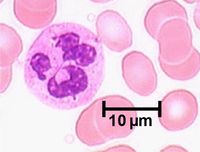 Neutrophils represent up to 70% of all leukocytes in the blood stream (in humans there are approximately 4.4 million neutrophils / millilitre of blood) and are distinguished by their irregular multi-lobed nucleus and indistinct granular appearance. They are 10-12µm and circulate in the blood for minutes to hours (average 6-8 hours) and lasting for 1-2 days in tissue. Although the most abundant leukocyte in the blood, the vast majority of neutrophils are found in the bone marrow (5x more) mostly as functionally immature precursor cells, although this varies between species with mice having a large pool of functional neutrophils in their bone marrow. Neutrophils play a key role during bacterial infections and have both phagocytic and killing actions.

Neutrophils are called heterophils in birds, reptiles and some mammals.

The neutrophil is a granulocyte and has a similar development to the other granulocytes; this process is called granulopoiesis.

Three types of granules are present in neutrophils: 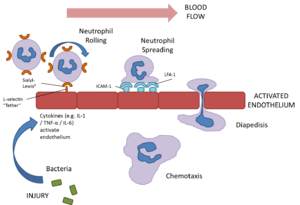 Extravasation (the Movement of Leukocytes from the Bloodstream) - R.J. Francis, RVC 2012

Neutrophils are extremely motile and express a number of adhesion molecules on their surface which allows them to attach to the walls of capillaries.

The neutrophil then exhibits amoeboid movement and can pass through holes in the capillary wall that are smaller than themselves (diapedesis). This is achieved by extending a small part of the cell (a pseudopodium) through the capillary; the neutrophil's cytoplasm and contents then passes through. This process is assisted by the release of histamine and other vasodilators by other inflammatory cells.

Once within the tissue, neutrophils respond to chemotactic substances such as cytokines or bacterial products which attract the neutrophil to the area of damage/ infection. This process is called chemotaxis (see below for a link to a video of this process). Once neutrophils have entered tissue they do not return to the blood stream but instead undergo cell death (see below) .

To function correctly neutrophils need to correctly identify material that is either foreign (non-self) or which requires removal, such as damaged cells. They are able to recognise some foreign material directly but in other circumstances proteins (opsonins) that bind to bacteria are required to increase the chances of successfully binding the foreign material to the neutrophil. Some examples of opsonins include complement component C3bi and bound antibody.

Oxygen independent killing uses lysosomes, cathepsin (a protease) and other mechanisms. Lysozymes are particularly effective against gram positive bacteria as they hydrolyse the glycopeptide coating of the bacterial organisms.

This is the process of granule fusion with the plasma membrane, causing the release of the granule contents into the immediate vicinity. Contents can include anti-microbial peptides and enzymes, as well as vasoactive peptides, for example, histamine and bradykinin. These vasoactive peptides can, as their name suggests, activate the endothelium. This causes the endothelium to become more "leaky" causing a great increase in extravasation of blood granulocytes and monocytes, and the diffusion of plasma proteins to the site of infection. These peptides, released from other cells as well as neutrophils (e.g. mast cells), are responsible for the classical signs of inflammation: redness (rubor), heat (calor), swelling (tumor), and pain (dolor), often accompanied by loss of function.

Neutrophils have many mechanisms to increase inflammation. These include cytokine release and exocytosis of vasoactive peptides as mentioned above. Neutrophil activation in an inflammatory lesion can also result in the release of prostaglandins, through synthesis by cyclo-oxygenase 2, which are responsible for vasoactive changes and for pain (N.B. These are reduced with cyclo-oxygenase (COX) inhibition, for example with the NSAID (non-steriodal anti-inflammatory drugs)'s Aspirin and Ibuprofen).

IL-6, IL-8 and complement component C5a and C3a are all chemoattractants for neutrophils, as well as bacteria specific peptides, for example fMLP (N-formylated Met-Leu-Phe). These are only a few examples of many chemoattractants that interact with neutrophils.

Neutrophils have a limited life span as they cannot synthesise protein or produce ATP through the electron transfer chain in mitochondria. They hence undergo a process called apoptosis (otherwise reffered to as Programmed Cell Death or Cell Suicide). This enables the neutrophils to be cleared by tissue macrophages, and therefore the physiological resolution of inflammation. However, in pathological conditions, where the neutrophils that have undergone apoptosis cannot be cleared as there are too few macrophages, or the pathogen is causing the death of the neutrophils, they undergo a process called necrosis. This results in the release of all of the intracellular contents, and therefore the amplification of the inflammatory response. It is these neutrophils that have undergone necrosis that forms what is known as pus.