From WikiVet English
Leukopoiesis
Jump to navigation Jump to search 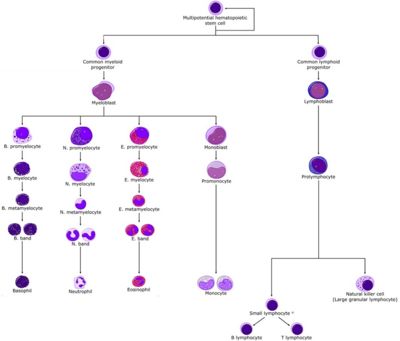 All granulocytes develop from the CFU-GEMM cells.

Large cell with a large nucleus and which demonstrates basophilic staining. This stage exists for all granulocytes.

During this stage primary (azurophilic) granules are formed. This stage exists for all granulocytes.

The developing neutrophil can now be differentiated from basophils and eosinophils as neutrophil specific granules are now being formed.

At this stage mitosis can no longer occur. The nucleus elongates, becomes heterochromatic and has a kidney like shape. Differentiation is now much clearer from other granulocytes as the specific granules are in a far greater number than the primary granules formed in the promyelocyte stage.

Mature neutrophil is formed and the nucleus is segmented and has 3 to 5 lobes. This lobular structure of the nucleus gives rise to the name polymorphonuclear neutrophil.

Under the stimulation of GM-CSF and IL-3, the CFU-GEMM differentiates into CFU-Ba.

These stages are common to all granulocytes and no distinction can be made between different cell lines.

Final nuclear shape is masked by the high density of cytoplasmic granules.

Under the stimulation of GM-CSF, IL-3 and IL-5 the CFU-GEMM differentiates into the CFU-Eo.

These stages are common to all granulocytes and no distinction can be made between different cell lines.

Mature cell has a bilobed nucleus. There are species specific variations in granule size once stained.

Monocytes develop from the same precursor as neutrophils - the CFU-GM. This then differentiates into the CFU-M under the influence of GM-CSF, IL-3 and M-CSF.

This is the first stage after cell has differentiated into the CFU-M.

Cell has a large nucleus and basophilic cytoplasm and consists of two populations:- One rapidly dividing and the other slowly dividing, which acts as a reservoir.

Monocytes are incapable of mitosis and enter the circulation. They have a large kidney shaped nucleus with a slightly basophilic cytoplasm, which is often vacuolated.

Once the monocyte has entered tissue it differentiates into a macrophage.