From WikiVet English
B cells
Jump to navigation Jump to search 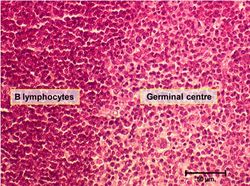 B Cells in Lymph node

Also known as B lymphocytes

So named as they were initially found in the Bursa of Fabricius, B cells produce antibodies and are associated with humoral immunity (T cells are part of the cell-mediated immune response), and are an integral part of the adaptive immune system. They represent 20-30% of circulating lymphocytes.

B cells have cell surface proteins known as B cell receptors (BCRs) that are known as immunoglobulins; IgM is the membrane bound BCR that is expressed when the B cell is immature, changing to IgD when the cell is mature. IgM has a large molecular mass and can bind up to 10 antigens simultaneously. B cells also express MHC II, CD9, CD,19, CD20 and CD24.

Under antigenic stimulation B cells differentiate into plasma cells and memory cells.