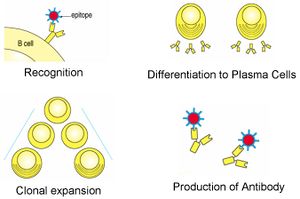 Mature B cells that undergo stimulation by an antigen undergo class switching, and differentiate into either plasma or memory cells.

In the paracortex region of the lymph node binding to MHC II in the presence of IL-4 produced by the CD4+ T cells (TH2 type) causes the B cells to differentiate; most will become plasma cells, however a small number will become memory cells.

Follicular dendritic cells present in the germinal centers of peripheral lymphoid organs can absorb intact antigen onto their surface to present to B cells to stimulate differentiation.

Plasma cells are oval, around 9µm and have a round prominent nucleus. The cytoplasm is extensive and strongly basophilic when stained. It contains large amounts of rough endoplasmic reticulum and the Golgi apparatus is large and appears as a clear crescent-shaped structure near the nucleus. Some plasma cells, known as "Mott cells", accumulate considerable quantities of, perhaps abnormal, antibody and this appears as a large eosinophilic blob filling the cytoplasm and displacing the nucleus to one side. These blobs are called "Russell Bodies".

Although they can live for months most plasma cells only live for a few days and do not replicate in this time.

Interaction of a B-cell with antigen results in clonal expansion, as does activation by T-cells. The majority of B-cell clones mature into plasma cells. Plasma cells are found in the splenic red pulp, lymph node medulla and bone marrow. Plasma cells are the terminal differentiation state of B-cells. They migrate to the medullary cords where their sole function is to secrete antibody.

Initially plasma cell produce Immunoglobulin M (IgM) however this is not always the most appropriate Ig to be produced and therefore stimulation by T cells and interleukins causes the plasma cells to undergo class switching to produce different classes of Immunoglobulins.

There are two types of B cell response to antigen; one is dependant and the other independant of T cell interaction.

B cells are activated in this instance by non-protinaceous antigens such as lipopolysaccharides which act as mitogens for the B cells by stimulating cell division. These antigens only stimulate primary immune responses (production of IgM) and do not produce memory cells. Initial and subsequent exposure to an antigen stimulates an identical response from the B cell.

The B cell response is to protinaceous antigens and T cells moderate the response, which occurs in the germinal centres of follicles in secondary lymphoid tissues.

B cells then act as antigen presenting cells on MHC II, with T cells interacting via cell surface receptors:

T cells produce cytokines such as IL-4 which induces class switching from IgM and the formation of memory cells.

The log phase will peak after about 10-14 days and the Plateau Phase will then occur. Class switching occurs replacing decreasing levels of IgM with IgG. Antibody levels then begin to decline as plasma cells undergo apoptosis.

During the primary response, IgG production lags about a week behind that of IgM.

The production of antibody to any antigen ceases within a few weeks of immunisation as the antigen disappears from the body; However, the animal retains immunological memory of the antigen which occurs after the primary response - it is seen on the second and subsequent exposures to the same antigen. In effect, there is an expanded pool of memory B and T cells from the first exposure to the particular antigen which permits a shorter lag phase and a longer plateau phase as antibody persists for an extended time. There is a higher antibody titre overall due to cloanal expansion and Long-lived memory cells which are qualitatively distinct are produced. Antigen is retained within the immune system on the surface of follicular dendritic cells and this can stimulate the immune system for years.

If many plasma cells are present in blood, it is due to a plasma cell tumour that has begun to metastasise.

The differentiated B cells that remain in the cortex become memory cells and these proliferate and form germinal centres in the lymph node.

Memory cells are long lived and responsible for long term immunity providing the immune system with a memory of previously encountered antigens. When they experience an antigen again they proliferate and differentiate into plasma cells. This response produces up to ten times more plasma cells than the original exposure to the antigen and is why the second immune response to an antigen is both more rapid and much stronger than the first response.