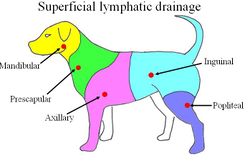 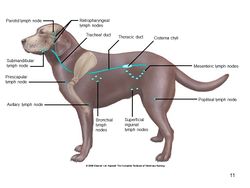 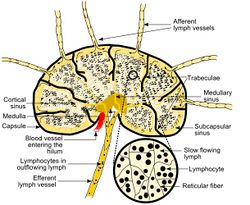 Part of the lymphatic system, the body contains hundreds of lymph nodes of varying size (1-20mm) and these are located along the routes of lymphatic vessels. They are found throughout the body but are more concentrated in the axilla, groin and mesenteries. Lymph nodes act as a filter for the lymph removing antigens and releasing immune-competent cells and immunoglobulins.

Lymph nodes develop from lateral plate mesoderm in paired sacs from lymphatic vessels. These sacs undergo remodelling, and endothelial and mesenchymal outgrowths form the meshwork of channels and spaces that produces the cortex-medulla structure. Lymphocytes then populate the cortex and medulla. The subcapular sinus is a remainder of the lymphatic vessel. 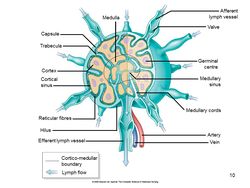 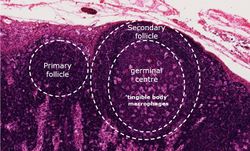 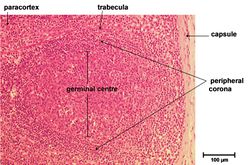 Grossly the lymph nodes are round or bean shaped and have an outer cortex and an inner medulla. Microscopically the nodes have follicles, paracortical zones and medullary cords and sinuses. At the hilum the medulla is present on the outer part of the node. Lymph nodes are located in series with lymphatic vessels. Afferent vessels enter the node on its convex side and efferent vessels exit on its concave side.

The nodes are surrounded by a fibrous capsule that extends into the node as trabeculae, which provide an overall framework. Below the capsule is the subcapsular sinus. The nodes' parenchyma contain a fine network of reticular fibres and reticular cells. Reticular cells provide "scaffolding" for other cells as well as expressing surface complexes and substance to attract T cells, B cells and dendritic cells. The cortex has aggregations of B cells (in the follicles) in its outer region and a paracortex consisting of a rim of T cells surrounding these follicles. Dendritic cells are also found in close association with the T cells. The medulla contains medullary cords of cells (B cells, plasma cells and some macrophages) and between these cords is the medullary sinus lined with endothelial cells and macrophages.

Antigens and transformed cells that pass through the sinuses are filtered by macrophages and removed from the lymph.

Follicles in the cortex of a stimulated node are larger and have a pale germinal centre. Activated B cells differentiate into plasma and memory cells. Plasma cells migrate to the medullary cords and produce immunoglobulins.

High endothelial venules (HEV) are composed of cuboidal/columnar epithelium and are the major route for lymphocytes to enter the lymph node. HEV contain a large number of aquaporin-1 channels allowing for a large uptake of water which in turn drives lymph flow through the cortex. This fluid is then returned directly to the bloodstream. The venules are the source of most of the node's T cells and B cells and express selectins (receptors for lymphocytes primed with antigens).

HEV express CD34 and GlyCAM-1 which bind to L-selectin on naive lymphocytes. This allows circulating lymphocytes to recognise when they have reached a secondary lymphoid organ stimulating them to leave the bloodstream and enter the lymphatic tissue.

As well as dolphins, hippopotamuses and rhinoceroses

The structure of the pig lymph node is inverted compared with that of most mammals.

The lymph nodes are secondary lymphoid tissue, and as the spleen removes antigens from the blood, lymph nodes remove antigens from tissue/lymph. Antigen presenting cells (B cells and T cells) migrate from peripheral tissue via afferent lymphatic vessels to the lymph nodes where they present their antigen to lymphocytes. B cells and T cells enter via the high endothelial venules by diapedesis and B cells migrate to the cortex while T cells to the deep cortex.

Antibodies and immunologically competent cells leave the lymph nodes via the efferent lymphatics.