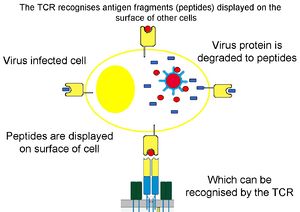 T cells are so named as they differentiate in the thymus. They are long lived and are involved in cell mediated immunity. They represent 60-80% of the circulating lymphocytes and all express the markers CD2, CD3 and CD7 as well as having T cell receptors (TCR). Each T cell has 30,000 TCRs each of which is identical and recognises antigens and major histocompatability complex (MHC) II.

Functionally they are divided into three subsets that are distinguished by the presence or absence of CD4 or CD8 markers. CD4 and CD8 cells have α/β antigen receptors while the γδ cells have the γ/δ antigens receptors. 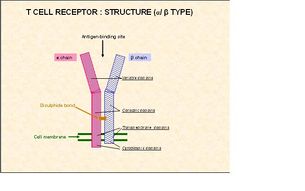 T-cell receptors are the antigen-specific receptors for T-lymphocytes, and are a combination of either α/β chains or γ/δ chains; one T-cell will express either α/β or γ/δ TCRs. The antigen-binding site of the TCR is produced by a combination of the V domains of the relevant chain. Like antibody, the specificity of the TCR is determined by the amino acid composition of the variable domains.

TCRs are linked to the cell membrane; structurally, they look like a single arm of an antibody molecule consisting of a distal domain and a membrane proximal constant domain

These T cells express the marker CD4 and are categorised into three groups, TH1 and TH2, with a third lineage, TH17 being recently described. These lineages are distinguished by the cytokines they produce. T helper cells recognise antigens bound to MHC II complexes.

TH1 cells interact with CD8+, NK and dendritic cells and TH2 cells interact with B cells. TH1 cells are involved with the control of intracellular pathogens and TH2 cells extracellular pathogens. IL-2 produced by TH1 cells stimulates further proliferation of CD4+ cells. TH17 cells are produced to enhance innate immunity, with the cytokines produced increasing the extravasation of neutrophils.

T cell differentiation is a field of continual change, with discoveries made on a regular basis.

These T cells express the marker CD8 and once fully mature seek and destroy target cells (infected or neoplastic cells). When the cytotoxic T cell recognises the MHC I complex on the target cell (MHC I binds to TCR) the T cell kills that cell -for example with a viral infection, viral peptides associate with MHC I and the CD8+ T cell recognises this and binds to the infected cell. Only two pathways are used by cytotoxic T cells to kill cells:

In both cases direct contact is required between the T cell and target cell, and cell killing can take several minutes.

Information on these cells is varied.

They do not express CD4 or CD8 and have γδ antigen receptors rather than α/β like other T cells. They develop in the thymus and migrate to epithelial tissues where they remain. The number present in an individual varies greatly but is generally greatest in immature ruminants and pigs.

The cells can be divided into two subsets: