From WikiVet English
(Redirected from IgE) 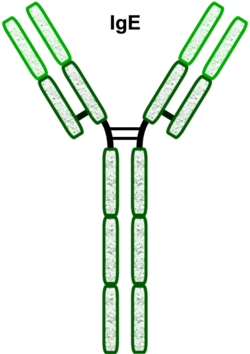 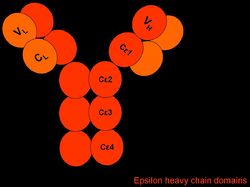 Commonly referred to as IgE.

Unlike IgM, IgG and IgA, IgE does not function as a soluble antibody, with binding to Fcε receptors required before it can bind to the target antigen, and is found in low levels in blood plasma. Like IgA, it is produced by plasma cells and is mainly localised to mucosal surfaces.

IgE is Y-shaped with heavy chain type ε, and exists as a monomer.

Note: Janeway [1] states that IgE has no hinge region whereas Tizard [2] indicates that it does.

It is produced when TH2 cells stimulate CD40 and produce IL-4 and IL-13, which causes B cell differentiation to plasma cells and class switching to IgE production.

IgE triggers acute inflammation by binding to the FCεRI receptors on mast cells in the lamina propria and basophils, causing degranulation when bound to target. It is involved in type I hypersensitivity reactions. Cross-linking of IgE molecules by antigens, triggers mast cell and eosinophil degranulation and an inflammatory response. IgE has considerable involvement in producing immunity to parasitic worms, particularly nematode parasites. It may mediate their expulsion or killing via mast cell activity, cytotoxic eosinophils, macrophages, and so on.