The Central Nervous System (CNS) is composed of the brain and the spinal cord. This page is specifically focussed on the histologic appearance, for anatomy see Forebrain, Midbrain, Hindbrain, Cranial Nerves, Spinal Cord and CNS Development.

The spinal cord is composed of two discrete parts; the white matter, which is the outer part of the cord and the grey matter, which is the inner portion of the cord. The white matter is given this name due to its appearance in unfixed histological specimens in which the white nature of the tissue is caused by the myelination of ascending and descending nerve fibres. The grey matter is also named after its unfixed histological appearance and contains the cell bodies of neurons as well as nerve fibres.

The relative size of the grey matter is dependant on the number of motor cells related to controlling limbs and therefore the size varies along the length of the spine. Around the areas of the fore and hindlimbs, the grey matter is considerably larger. 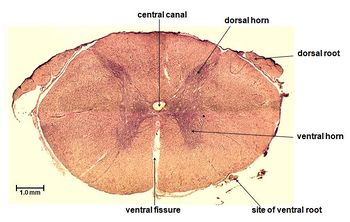 The above image shows a complete cross-sectional histology of a spinal cord. In this particular stain (H&E) the grey matter can be seen in a slightly darker shade than the white matter. The relative size of the grey matter is small compared to the white matter and therefore the level of the cross-section is unlikely to be around the level of any limbs. The dorsal horns can be seen to extend near to the dorso-lateral surface of the spine. The slide also contains small elements of the dorsal and ventral roots leaving the spinal cord. The connecting element of the grey matter which is immediately ventral to the central canal is called the grey commissure (GC). The stained areas found around the edge of the spinal cord are fibrous material that is the pia mater. This pia mater follows the contours of the spinal cord and also folds into the ventral fissure. At the ventral aspect of the ventral fissure some small blood vessels can be seen present in the pia mater. 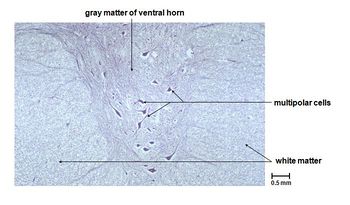 The above image shows a higher magnification view of the grey matter of the spinal cord which is clearly surrounded by white matter. The ventral horn has a number of processes which extend into the white mater. The image displays a number of multipolar cells that are relatively large compared to the nerve fibres which surround these cells. Although at this magnification it is not possible to definitively identify these cells but it is likely that they are cell bodies of neurons. The surrounding nerve fibres are likely to be neuroglial cells, although the cytoplasm of these cells is not visible. The seemingly poor organisation of the tissues surrounding these neurons is often referred to as neuropil. 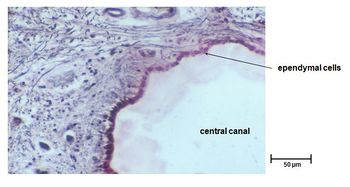 This image shows a moderately magnified image of the outer edge of the spinal cord. The bulk of the histological appearance is made up by white matter which is predominantly nerve fibres and myelin sheaths. This histological image clearly shows the different layering of protection around the outside of the spinal cord and how closely associated this protection is. The outer layer is the dura mater and then continuing to move towards the spinal cord there is the sub-dural space leading to the arachnoid mater. Inside the arachnoid space is the sub-arachnoid space and then the pia mater which is closely bound to the underlying neural tissues.

The cerebrum contains the cell bodies of nerves both receiving and sending sensory information involved in controlling voluntary movement via motor activity and in the integration and coordination of other nerves. The cerebrum is also involved in memory functions.

In a full thickness histological image of the cerebrum it would be possible to distinguish numerous layers including the pia mater on the outer edge of the brain, the plexiform layer, pyramidal layer, granular layer and a polymorphic cell layer innermost, prior to the white matter towards the centre of the brain. The plexiform layer consists of mainly fibrous material which run in parallel to the surface of the brain. This layer contains relatively few cells, mainly neuroglial cells. The pyramidal cell layers mainly consist of small, medium and large pyramidal shaped cells which generally become larger as they become closer to the white matter of the cerebrum. Finally the pleomorphic layer contains cells of very diverse shapes, a majority of which have a spindle shape. These cells are often called fusiform cells. 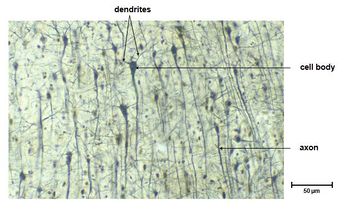 The histologic image above displays a very clear high magnification image of cell bodies with dendrites and axons extending from them. It should be noted that such a clear image of the nerve cells with their associated nerve fibres within the cerebrum is unusual and in most cases at a magnification of 350x a more detailed view of the types of cells found in the layers described above would be seen. A common stain for the cerebrum is Luxol blue which allows the visualisation of the plexiform cells, small to large pyramidal cells, granular cells and pleopmorphic cells. In most cases small capillaries are also usually visible, although none are present on the image above. Surrounding the neurons is the neuropil which is made up of densely packed aggregation of nerve fibres and neuroglial cells.

The cerebellum lies behind the brain and below the level of the cerebrum. The cerebellum coordinates voluntary movements via controlling multiple muscle function as well as maintaining normal posture.

On the outer edge of the molecular layer it is possible to visualise the pia mater fibrous covering. In the above image and as is common in cerebellar histology, the fixing process causes shrinkage of the pia mater resulting in an artefact appearance. 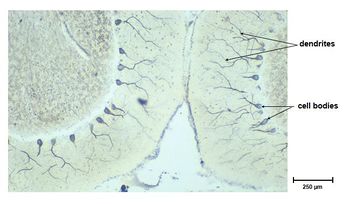 This image shows a higher magnification of the junction between the molecular and granular layer. This junction contains a number of large cell bodies which are called Purkinje cells. Purkinje cells are characteristic of the histologic appearance of the cerebellum. Each cell has a number of dendrites that are within the molecular layer. The granular layer has a slightly darker mottled appearance which is made up of small neurons called Granule cells. These cells receive impulses from other parts of the CNS.