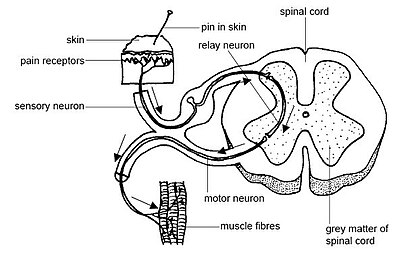 The spinal cord can be divided to several regions:

Nerves originating from the spinal cord and the segmental spinal nerves innervate the limbs.

The forelimb nerves include the suprascapular (C5-6), the musculocutaneous (C5-7), the ulna/median (Originates from the brachial plexus, which is formed from C5-T1) and the radial (C5-T1).

The hindlimb nerves include the obturator (L2-4), the femoral (L2-4) and the sciatic (L4-S3). The sciatic nerve branches to the tibial nerve and the peroneal nerve.

The spinal cord is constructed of the marginal layer which has axons and white matter, the mantle which contains cell bodies and grey matter and the spinal canal. This canal conducts sensory information from the peripheral nervous system (both somatic and autonomic) to the brain, conducts motor information from the brain to various effectors and acts as a minor reflex center.

The spinal cord contains a number of sensory (ascending) pathways or tracts contained within the white matter. These pathways allow sensory information such as pain, touch, temperature or kinaesthesia (conscious proprioception) to be passed through the spinal cord and on to higher levels of the brain.

It is important to note that there is no direct vasculature to the spinal cord but instead there are a number of choroid plexuses that act as an exchanger between the vasculature of the spinal cord/brain and the fluid surrounding these structures. This distinction is referred to as the "blood-brain barrier".

The spinal cord is supplied by three main arteries that run along its length; the Ventral Spinal Artery, and paired Dorsolateral Spinal Arteries. The ventral spinal artery is the largest and follows the ventral fissure of the spinal cord. The dorsolateral arteries run close to the groove from which the dorsal nerve roots arise. Together with these three main arteries, the spinal cord is also supplied by branches from regional arteries including branches in the cervical, intercostal, lumbar and sacral regions. These regional arteries enter the spine at the intervertebral foramina, often accompanying the roots of spinal nerves. These regional arteries also form plexuses into which the three main longitudinal arteries run. The number and type of arteries that enter the spine from regional branches varies with species and also between individuals.
The ventral spinal artery supplies the main "core" of the spinal cord, i.e. the grey matter. It also partially supplies the white matter via the ventral fissure, although the majority of the white matter is supplied by radial branches of the dorsolateral arteries. There are also a number of anastamoses between both sets of arteries.

Along the length of the spinal cord runs the vertebral venous plexus which drains the blood from the vertebrae and surrounding musculature. This venous plexus gives rise to veins that then leave the vertebrae via the intervertebral foramina and then go on to join the major venous channels of the neck and the trunk; namely the vertebral, cranial caval, azygous and caudal caval veins.

The venous plexus consists of paired channels within the epidural space that lie in a ventral position to the spinal cord. Each side of the pair is connected to its opposing plexus around the vertebrae resulting in a ladder-type pattern of venous vessels. The connections between each side are via the intervertebral foramina and these vessels are in close proximity to the spinal nerves.

The veins around the plexuses have no valves and can theoretically pass blood in either direction. The vessels are able to adjust their size/pressure to compensate for intrathoracic pressure. This intermittency of flow causes an increased risk of septic or neoplastic disease within the vertebral column. Where blood is impeded or where flow may become temporarily held stagnant, this may allow tumor seeds or micro-organisms to settle within tributaries.

When giving an epidural or a subarachnoid puncture, the above described anatomy results in there being an increased risk of haemorrhage. The risk of haemorrhage is greatest at the atlanto-occipital space where there are particularly large tributaries.

There are no lymphatic vessels or nodes within the spinal cord or other central nervous tissue.

The layer of tissue that can be seen surrounding the spinal cord is the pia mater and is a pale staining fibrous material. Blood vessels can also be made seen and are closely associated with the pia mater. The ventral spinal artery and vein can be seen adjacent to the ventral fissure.

If stains such as toluidine blue are used, Nissl bodies within the cytoplasm of the cell bodies may become visible, appearing as large dark staining bodies. Nissl bodies do not extend into the axon hillock. Neuropil stains very faintly using toluidine blue.