Schematic Diagram of the Pituitary Gland

The pituitary gland, or hypophysis is an elongated appendage of the brain lying within a bony cavity of the sphenoid bone in the base of the skull - the Sella Turcica. The hypophysis is suspended from the hypothalamus by a thin stalk. It lies between the more rostral optic chiasma, and the more caudal mammillary bodies.

The gland is divided into anterior and posterior parts, with different embryological origins reflecting a difference in function:

1.Posterior pituitary: (Neurohypophysis), consisting of the Pars Nervosa, this section is derived from a downgrowth of neural tissue from the hypothalamus.

2.Anterior pituitary: (Adenohypophysis), consisting of the Pars Tuberalis and Pars Distalis this part has an embryological origin as an epithelial upgrowth from the foetal oral cavity called Rathke's Pouch.

3.Pars Intermedia: This part separates the anterior and posterior lobes. 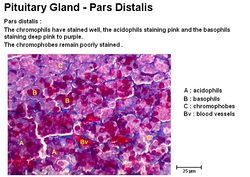 1.Trophic hormones: Stimulate a further endocrine gland e.g. TSH, ACTH, FSH, LH. These are then controlled by negative feedback, whereby the product of the downstream endocrine gland limits the release of the orginal stimulating hormone.

Hormones of the Anterior Pituitary Gland

This is the residual lumen of Rathke's Pouch and consists of a series of small cystic cavities (follicles filled with colloid), with both basophillic and chromatophobic (poorly staining) cell types. These extend into the pars nervosa. In horses, melanotropes convert the prohormone proopiomelanocorticotropin (POMC) to melanocyte stimulating hormone (a-MSH) and corticotropin-like intermediate lobe peptide (CLIP):

ADH, also called arginine vasopressin (AVP) is a peptide hormone produced by cell bodies in the paraventricular and supraoptic nuclei of the hypothalamus. It is transported down axons into the posterior pituitary for storage, prior to release. It is derived from a preprohormone which is converted to the active form en route to the posterior pituitary gland. It acts on the renal tubules and blood vessels.

Action on the Renal Tubules

ADH is released in response to reduction in plasma volume, a decrease in blood pressure (detected by baroreceptors in the left atrium, pulmonary vessels, aortic arch and carotid sinus), high levels of angiotensin 2 (part of the RAAS), increased sympathetic activation or an increase in the osmolarity of the extracellular fluid (ECF)(detected by osmoreceptors within the hypothalamus). If the osmolarity is high or the volume is low, ADH will be released. This acts on the renal tubules, decreasing water loss into the urine by the following mechanisms:

It acts on V2 receptors on the peritubular surface of the collecting ducts in the kidney. The permeability to water in the distal tubule and collecting duct is increased via insertion of aquaporins into the apical membrane of principal cells (aquaporins are always present in the basolateral membranes). More water therefore, moves out of the tubule and into the intracellular space. Urine volume decreases and urine concentration increases. It is also released in response to cholecystokinin from the small intestine.

Action on the Blood Vessels

It causes vasoconstriction of blood vessels as a secondary function. It binds to V1 receptors on vascular smooth muscle and acts via the IP3 signal transduction pathway. It increases the arterial pressure. Normal physiological concentrations do not cause vasoconstriction, if severe hypovolaemic shock is suffered, lots of ADH is released due to decreased plasma volume - the amount of ADH released is relative to the degree of hypovoleamia. These very high levels are what is called vasoactive and help with a compensatory mechanism of increased vascular resistance. This increased vascular resistance increases arterial blood pressure. Stretch, or volume receptors in the veins and atria can detect a decrease in volume of the blood. This causes nervous impulses to be sent to the hypothalamus, resulting in an increase in ADH production, conserving water at the kidneys. This mechanism is only triggered by a large loss of volume, but results in a large amount of ADH being produced. It should be noted that thirst stimulation is the main method of correcting a dehydration status.

Oxytocin is produced by cell bodies in the paraventricular and supraoptic nuclei of the hypothalamus. Oxytocin is transported down axons into the posterior pituitary where they are stored prior to release. Release is controlled by neural activity in the nerve cells; neurosecretion. It acts on the smooth muscle of the mammary gland and uterus.

Oxytocin stimulates milk let down via contraction of the mammary alveoli. It does NOT stimulate milk synthesis (prolactin has this role). Oxytocin release occurs via neural activity. The teats have a high density of sensory nerve fibres, and these detect suckling, or preparation for milking. Other sensory inputs such as sight, smell, sounds of calf can add to the process:

Impulses travel via superficial sensory pathways and the inguinal nerve. Afferent sensory neurons enter the lumbar part of the spinal cord to the thalmus. They reach the cell bodies of neuroendocrine cells. Oxytocin is released from the nerve endings in the posterior pituitary gland and enters capillaries and the systemic circulation. Mammillary capillaries contract and the pressure within the alveoli increases. Resistance in the excretory ducts and teat canal is reduced, resulting in an increased milk outflow. This process takes 45-60 seconds to act.

During Stage 2 of parturition, the foetus engages the cervix. This initiates a neuroendocrine reflex, the Fergusson reflex. This is an example of a positive feedback mechanism, which occurs when stretch receptors in the cervix are stimulated. Sensory nerve endings in the cervix are stimulated causing afferent nerve impulses to be sent to the hypothalamus. Neuroendocrine cells of the paraventricular and supraoptic nuclei depolarise and oxytocin is secreted from the pars nervosa. Oxytocin enters the blood circulation and acts on the oxytocin receptors in the myometrium. Uterine contractions therefore, increase in strength and frequency.