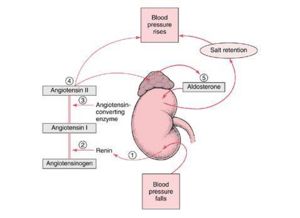 The RAAS is activated whenever blood flow through the kidneys is reduced, and when there are sodium losses in conditions such as diarrhoea, vomiting or excessive sweating. These losses reduce extracellular fluid volume, and this in turn reduces arterial blood pressure, which triggers the RAAS system through several different mechanisms. 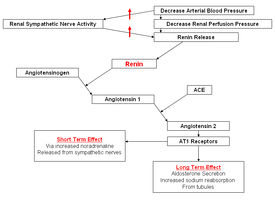 The Mechanism Behind the RAAS 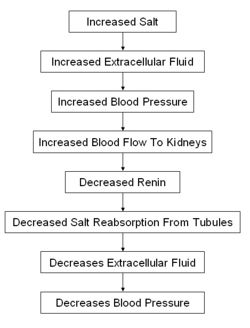 Summary of the purpose of the RAAS

In the event of blood pressure dropping, renin is secreted due to the decreased stretch of the juxtaglomerular cells and an increased sympathetic stimulation, triggered by the decreased activation of arterial baroreceptors. This enzyme cleaves the alpha glycoprotein, angiotensinogen, which is released from the liver. This produces angiotensin 1, which is further converted by Angiotensin Converting Enzyme (ACE) to angiotensin II, mainly in the lungs but to a much lesser extent locally in the kidneys. Angiotensin II then works to restore blood pressure by inducing constriction of peripheral vessels (arterioles), which increases vascular resistance, and constricting veins which reduces vascular volume. In this section, we cover its effects on and through the kidneys.

Angiotensin II acts on AT1 receptors to stimulate the release of aldosterone from the zona glomerulosa of the adrenal glands. This mineralocorticoid increases the excretion of potassium and the reabsorption of sodium, and therefore water and chloride from the distal tubule of the kidney, thus helping to increase blood pressure and volume. It also stimulates the thirst center, and increases the secretion of anti-diuretic hormone (ADH) to help increase blood volume by making the distal convoluted tubule and the collecting duct permeable to water. The RAAS allows pressure to return to 50% of baseline within 15 minutes of a significant haemorrhage occurring.

Effects of Angiotensin II on GFR

If blood pressure drops then glomerular filtration rate (GFR) also drops, due to reduced blood flow through the kidneys. To restore homeostasis, contraction of the efferent arteriole occurs in response to angiotensin II and the pressure difference between the afferent and efferent arterioles increases, creating greater filtration pressure. Therefore, when blood pressure falls, there is minimum alteration of GFR. The increased renal resistance to blood flow and the maintained GFR has many advantageous effects.

Increased total peripheral resistance helps to return blood pressure towards normal. (Angiotensin II also has vasoconstrictive effects in multiple organs.) The reduced perfusion of the kidneys allows blood to be diverted to the brain and heart. The constriction of the efferent arterioles also reduces hydrostatic pressure in the peritubular capillaries, increasing reabsorption of water and salt and helping to restore the extracellular fluid (ECF) and normalising blood pressure. The amount of waste excreted is linked to the GFR. Maintaining GFR, permits the excretion of waste products such as urea to be maintained.

Effects of Angiotensin II On Sodium

Induces insertion of Na+ channels into renal tubules via stimulation of AT1 receptors. These occur in:

1. The proximal tubule, with the addition of:

2. The thick ascending limb, with the addition of:

3. The collecting ducts, with the addition of: