From WikiVet English
Aldosterone
Jump to navigation Jump to search 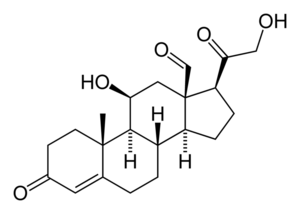 The release of aldosterone is stimulated by 3 things;

The release of aldosterone is inhibited by Atrial Natriuretic Peptide (ANP).

Aldosterone diffuses across the cell membrane of the principal cells of the distal tubule and the collecting duct. It binds to cytoplasmic receptors and works by altering the gene transcription and increasing the synthesis of proteins. It also affects ATP levels.

Aldosterone affects sodium entry and transport. It increases the number of apical sodium channels, NaCl co-transporters and Na+K+ATPase. It also increases the activity of the hydrogen sodium exchanger in the apical membrane and increases membrane permeability and the sodium pump activity. When sodium is reabsorbed, water follows it so the volume of the plasma is altered rather than the concentration of the sodium changing. I.e. angiotensin 2 and aldosterone affect sodium, but they also affect the extra cellular fluid (ECF) volume, so only the quantity is affected, not the concentration.

Antidiuretic hormone (ADH) and the thirst response also work together to dilute the ECF if the concentrations of sodium is high. So although there is more NaCl, the actual concentration is not really changed. If there was no secretion of aldosterone, a 20kg dog would excrete 15g per 24 hours. At maximal secretion, no significant amount of sodium would be excreted.

Increased Na+ / K+ ATPase pump activity, increases the amount of K+ influx into cells to reduce plasma K+. Potassium is generally not excreted. However, if plasma K+ is still, high aldosterone is stimulated. This causes potassium secretion and stimulates Na+ / K+ ATPases in the basolateral membrane of the principal cells. This results in increased potassium in the cells. Potassium then leaves via the apical leak channels , thanks to the electro-chemical gradient. This is a very tightly regulated system and allows large increase in K+ to have a miniscule effect on plasma K+.