The thyroid gland lies in the neck, in front of the upper part of the trachea. Two types of hormones are produced, which are the iodine containing hormones; tri-iodothyronine(T3) and thyroxine (T4). Thyroid hormones regulate the basal metabolic rate and are important in the regulation of growth of tissues, particularly nervous tissue. Release stimulated by TSH from the pituitary. The second type of hormone produced from the thyroid gland is calcitonin, which regulates blood calcium levels along with parathyroid hormone and acts to reduce blood calcium by inhibiting its removal from bone.

The thyroid gland is a downgrowth from the pharyngeal endoderm of the developing tongue. The calcitonin producing cells are different and are derived from the fourth branchial pouch.

The thyroid gland consists of two lobes (dog, horse), one on each lateral side of the cranial trachea. In the pig the lobes are connected by an isthmus with a small, central pyramidal lobe as part of that structure. Cattle have a particularly wide isthmus.

The thyroid gland is located adjacent to the cranial trachea. Close to the recurrent laryngeal nerve, carotid sheath and sternohyoid and sternothyroid muscles. The Parathyroid Glands are located dorsally to, or within the thyroid gland itself.

The gland consists of varying sized follicles, which are bounded by a single layer of cuboidal epithelial cells (follicular cells} and a basement membrane, surrounding a central lumen filled with a homogenous protein rich colloid (thyrogloblin). The apical surface of the cell membranes is covered with numerous micovilli to increase surface area. The follicular cells are connected by tight junctions, and have a dense capillary network. The colloid is a store of thyroid hormones prior to secretion. The thyroid gland is the only endocrine gland to store its hormone in large quantities. In the active gland colloid is diminished and epithelial cells are tall and columnar.

Within the connective tissue close to the follicles are C-cells alternatively known as parafollicular cells. They are found in clusters in the interfollicular space and are also known as clear cells as their cytoplasm doesn't stain with H and E. They secrete calcitonin, a hormone which acts to lower plasma Ca2+ levels.

Follicular cells synthesize thyroglobulin in their golgi apparatus. This is a glycoprotein consisting of 70 linked tyrosine molecules, 10% of which are iodinated, and is stored in the colloid.

The thyroglobulin is then split to form the two amino acid derivative hormones produced in the thyroid gland which are triiodothyronine (T3) and thyroxine (T4). Thyroxine contains 4 iodine atoms, triiodothyronine contains 3. Creation of these two hormones is the only role of iodine in the body.

The majority (90%) of hormone produced by the follicular cells is T4. T4 can only be made in the thyroid gland. It can then be converted by other tissues into T3.

Iodine circulates within the blood as iodide (I-). It is actively transported into the follicular cells by an Na+/I- symport in the basal membrane. This pump concentrates iodine in the colloid at a level up to 250x greater than the plasma level. This process is known as iodide trapping. The pump is activated by thyroid stimulating hormone (TSH) a hormone from the pituitary gland.

Any excess iodide is excreted via the kidneys.

Colloid uptake into the follicular cells takes place by endocytosis. The intracellular vesicles containing the colloid then fuse with lysosomes, where enzymes split the thyroglobulin into T3 and T4. The hormones diffuse across the basal plasma membrane into the interstitium (they are lipid soluble hormones).

The primary transport protein for thyroid hormones is thyroid binding globulin (TBG). Synthesized in the liver, this protein binds 70-80% of the circulating thyroid hormones.

The remainder are carried by thyroxine-binding prealbumin or albumin.

Only free T3 and free T4 can enter cells to exert their actions. T4 is deiodinated to T3 in many cells of the body, particularly the liver and kidneys.

The thyroid secretes 90% T4, with 50% of this being deiodinated to T3. The remainder is converted to reverse T3 (rT3). This is an inactive form of T3, and so creation of it is a regulatory mechanism. More rT3 is created when the body needs to reduce the action of T3 and T4.

The hormones are further deiodinated to diiodothyronine and monoiodothyronine in the liver and kidneys. Iodine is recycled or excreted in the urine. 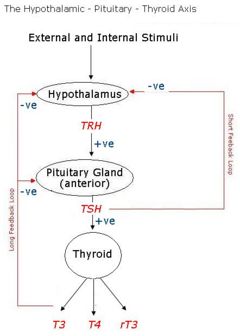 T3 and T4 have effects on all body systems and at all stages of life. These include: :Development where thyroid hormones are vital during the fetal period and the first few months after birth. T3 and T4 are the hormones for metamorphosis in frogs.

Euthyroid sick syndrome: concurrent disease such as starvation, sepsis, trauma or stress can cause a depression in basal thyroid levels as a normal response, to minimise the catabolic effects of thyroid hormones.

This occurs in many species and may lead to false diagnoses of hypothyroidism or a missed diagnosis of hyperthyroidism.

In horses, many factors influence the level of T3 and T4:

In foals: thyroid hormone concentrations are up to 14 times higher than in horses over the age of 2.

During normal feeding, T3 and T4 levels increase within two hours of feeding. Undernutrition results in an increase in T4 but T3 levels are unchanged. Excess protein and energy result in a decreased T4 and an increased T3.

In adult horses: undernutrition results in a decrease in both T3 and T4. Phenylbutazone is also known to decrease T4 levels.

Thyroid hormone levels increase with age, and are higher during pregnancy and times of low temperature.

Problems associated with the Thyroid Gland