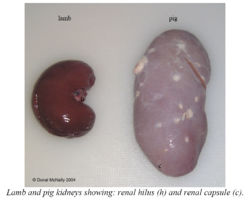 A picture showing a typical lamb and pig kidney. (Courtesy of Donal McNally - University of Nottingham

The urinary system includes the kidneys, the ureters which join the kidneys to the bladder, the bladder itself and the urethras which permit urine collecting in the bladder to be excreted - a process termed micturition. Understanding the physiology of kidney function is key when looking at the diseases that occur in this organ, and the anatomy of all the structures within the urinary sytem is significant as a foundation to understanding the pathology which affects them. The kidneys also play a vital role in the excretion of many different types of veterinary drug; newborn and aged animals have altered kidney functional capacity and this is an important factor in drug excretion rates. At a molecular level, an understanding of the principles of diffusion and osmosis will help to understand how water and other molecules can be redistibuted between the intracellular and extracellular spaces via the phospholipid bilayer that contains transport proteins that actively transport molecules such as sodium chloride.

The function of the kidneys is to maintain the volume and composition of plasma, regulate water, ion and pH levels, retain nutrients and excrete waste, toxins and excess electrolytes. The kidneys achieve these functions via glomerular filtration, solute reabsorption, tubular secretion, water balance and acid-base regulation.

The kidneys are paired organs which reside in the left hand side and right hand side of the dorsal abdomen respectively, and they form during development from the intermediate mesoderm. Their role is to filter the blood through the renal corpuscle; this comprises a capillary tuft known as a glomerulus which is surrounded by the Bowman's capsule within the nephron; the movement of fluid and soluble material across these structures forms what is known as the filtrate. The filtrate is then mostly reabsorbed along the nephron until what is left comprises compounds superfluous to the requirements of the animal. Some compounds, normally fully reabsorbed, are occasionally present in the body in excess - the kidney tubules are able to respond to this excess and excrete such compounds in greater amounts. In this way the kidneys play a major role in the homeostasis of an animal. The kidneys also play a vital role in total water balance, varying their excretion of water in relation to the hydration status of the animal. Medically, the physiology of the kidneys can be manipulated using diuretic drugs, which inhibit the reabsorption of water from the tubules resulting in an increase in volume and therefore water loss in the urine.

The kidneys receive 25% of cardiac output. From this they filter 20% of the plasma forming a filtrate of which all but 1% is reabsorbed. This equates to the entire circulatory volume being filtered and reabsorbed every 30 minutes. The kidneys respond dynamically to changes in blood pressure and hydration status, using several mechanisms of regulation including the Renin-Angiotensin-Aldosterone system which can alter the movement of sodium chloride and water in the vascular system and extracellular spaces.

The kidneys are responsible for the production and release of two hormones - Erythropoietin and Renin, which are produced in the Juxtaglomerular Cells. The kidneys also regulate the activation of vitamin D.

The lower urinary tract (LUT) is the collection of organs which convey the urine formed within the kidneys to the exterior of the body. Urine is not altered in this part of the system in species other than the horse (where mucous is added) but instead the function of the LUT is to collect and store urine until enough of it is collected for release to become necessary. This gives the animal urinary continence. Three major structures make up this tract; the ureters, the bladder and the urethras which are formed from the horizontal division of the primitive hind gut in the cloacal region during development. Urine gives valuable information to the veterinary practitioner regarding kidney function and other urinary system abnormalities such as crystals, casts and infections.

The renal anatomy and physiology of fish, amphibians, birds and reptiles is significantly different to that of mammals. Fish, for example have only a single kidney, and in physiological terms the products of excretion vary between these animal groups from that of mammals.

Websites: The data found within the tables on the page entitled Urine Normal Composition was adapted from the Merck Veterinary Manual online reference table entitled Urine Volume and Specific Gravity