Gases or liquids can be unevenly distributed between two areas. If one area has a higher concentration than the other then the differance between these two areas is termed the concentration gradient. The equality is then corrected by the movement of the molecules down this so called gradient from the region of high concentration to that of low. This process is passive as the molecules do not have to be forced to do this and it is reffered to as diffusion. 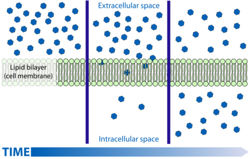 Q = the transport rate of a substance by diffusion

C1 C2 = The concentrations in the two areas

Diffusion as a Transport Mechanism

Diffusion is very efficient over short distances and does not require energy. As such it is used in a variety of body systems where gradients and membranes suited to it are found. However over large distances diffusion is very slow.

Diffusion Through the Lipid Bilayer