This section is devoted specifically to the renal anatomy and physiology of fish, aquatic and terrestrial amphibians, birds and reptiles. These animals excrete nitrogenous waste differently to domestic mammals, this combined with the very different habitats where these animals exist results in a variety of different renal mechanisms and appearances.

Fish have a single kidney which is the same length as the coelom. It can be divided up into cranial and caudal parts; the cranial part has endocrine and haematopoietic functions and the caudal is where filtration occurs. It is not uncommon for some species to have no glomeruli however as a rule freshwater fish have larger glomeruli in greater numbers. Some species also have renal portal veins.

As the environment is hypotonic compared to the body of the fish ions are lost and water is gained across the gills therefore the kidney excretes water and has a very high glomerular filtration rate. The gills also undertake active uptake of NaCl and excrete ammonia and the diet is also very important for maintaining NaCl levels

The environment is hypertonic compared to the body of the fish therefore water is lost across their gills so they drink sea water to replace this which results in a large intake of salt (activates Angiotensin 2). They excrete both ammonia and NaCl across their gills and further NaCl across their skin. Their kidneys have small or absent glomeruli and their main function is the elimination of excess divalent ions e.g. Mg2+

In amphibians urine moves from the kidney down the ducts into the cloaca and then onto a urinary bladder. Caudates and Anurans possess renal portal veins which carry blood from the hind limbs to the kidney before it goes back to the heart. They have paired posterior kidneys which lie retroperitoneally. Caecilians have no renal portal veins and have one kidney the full length of the coelom

Aquatic amphibians have extremely water permeable skin and therefore lots of osmosis occurs across the skin. It falls to the kidney to excrete excess water and ammonia

Terrestrial amphibians have the totally opposite problem to their aquatic counterparts. To them water conservation is very important as water is lost via various routes including evaporation. They therefore have a urinary bladder which is permeable and water is reabsorbed across it this is controlled by arginine vasotocin (AVT). This chemical increases the number of aquaporins in the membrane. They excrete urea and are able to decrease their GFR if water is reduced. 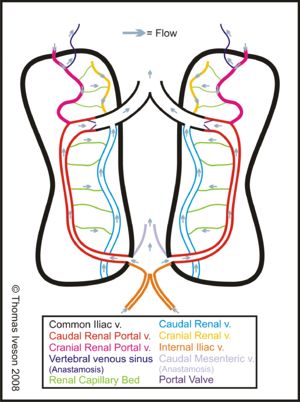 A schematic showing the vascularisation of the avian kidneys, specifically the renal portal structure. N.B. the renal arteries have been excluded

Birds have paired kidneys which account for 1 – 2.5% of their body weight which is significant compared to 0.5% in mammals. They are located caudal to the caudal edge of the lungs near the abdominal air sac diverticulum. They are subdivided into cranial, middle and caudal parts and have lobules comprising a cortex and a medullar cone. Birds have a renal portal system similar to that of reptiles.

There are two possible types of nephrons found in birds

Physiology of the Elimination of Uric Acid

These glands are found in desert and aquatic birds as salt consumption exceeds renal clearance. These supraorbital glands drain into the nostrils and account for 20% of total NaCl excretion. They are not under the control of kidneys and they hypertrophy if the birds salt intake increases.

In birds the blood from the hindlimbs is carried directly to the kidneys. The cranial and caudal renal portal veins deliver blood from the hindlimbs into the capillary beds of the interlobar arteries. Therefore blood which has already been through capillary beds in the hind limbs mixes with blood directly from the heart. It bypasses the glomeruli and waste products in the blood are secreted directly into the tubules. This is thought to be a more efficent way to excrete uric acid and urate. A portal valve regulates how much blood from the hindlimbs passes through the kidneys. When open very little blood enters the capillary beds as it follows the path of least resistance. If the valve narrows then blood is forced into the capillary beds. However some blood always escapes thanks to connections with both the caudal mesenteric veins and vertebral sinuses. It is of significance when injecting these animals if the injection is given in the caudal half of the body most of the drug will be potentially lost in the urine before it has time to act it may also be toxic to the kidney as it has not been metabolised by the liver

Other Roles of the Avian Kidney

Two kidneys are present in lizards but the caudal aspect of them is fused in many species. Also the presence of a urinary bladder is species specific.

Chelonians have an osmotically permeable bladder which can reabsorb water. This structure acts as a buoyancy aid in aquatic turtles and helps reabsorb sodium. Some species have paired accessory bladders off the main structure

Reptiles have no pelvis, pyramids, cortex or medulla and kidney is only made up of a few thousand nephrons with poorly developed glomeruli. Few capillaries supply the kidneys and the nephrons have no loop of henle. In squamate males a sexual segment between the distal tubule and collecting ducts is present.

Reptiles excrete nitrogenous waste mainly in the form of uric acid. It is suspended in spheres complexed with protein and sodium (carnivorous diet) or potassium (herbivorous diet) along with mucoid substances (glycoprotein and mucopolysaccharides). As a result their urine contains large quantities of protein.

Uric acid is secreted into the proximal tubules actively using potassium and into the bladder (where present) is response to H+ secretion. The secretion of urate increases in response to a decrease in blood pH.

Voided urine is not reflective of kidney function due to the transport of ions and water across the colon wall and the reabsorption of sodium / excretion of potassium and urates in the bladder.

Other Roles of the Reptilian Kidney