The pancreas is a tubuloalveolar gland and has exocrine and endocrine tissues. The exocrine is the larger of the two parts and secretes pancreatic juice; a solution containing enzymes for carbohydrate, protein and triacylglycerol digestion. Pancreatic juice drains into the small intestine where it is functional. The endocrine part secretes hormones for the regulation of blood glucose concentration, including insulin, glucagon and somatostatin. The functional units of the endocrine part are the islets of Langerhans.

The pancreas develops from endoderm, except for the connective tissue which develops from splanchnic mesoderm. Development begins with evaginations of the digestive tube caudal to the stomach. Two pancreatic buds form, one in the dorsal mesogastrium and one in the ventral mesogastrium. Some epithelial cells lose their connections to the developing duct system of the exocrine pancreas and develop into the islets of Langerhans of the endocrine pancreas. As the stomach rotates, the ventral bud moves to become more dorsal. The two buds then fuse; the left lobe is derived from the dorsal bud and the right lobe from the ventral bud. The duct of the ventral lobe (pancreatic duct) joins with the bile duct to form the common bile duct which opens into the duodenum at the major duodenal papilla. The duct of the dorsal lobe (accessory duct) enters the duodenum at the minor duodenal papilla. There is species variation in the persistence of each duct. 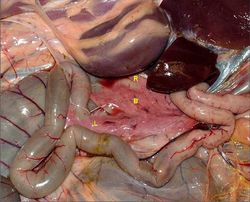 The pancreas is located in the craniodorsal part of the abdomen in close association with the duodenum. It can be divided into three parts; a body and left and right lobes. The lobes are loosely united by interlobular connective tissue. Connective tissue contains blood vessels, nerves and lymphatics. Generally, the portal vein runs between the left and right lobes (see species differences). The pancreas is roughly "V" shaped in all species. As mentioned in the development section, there are two ducts present in the pancreas. Their presence reflects the convergent development pattern of the pancreas, however in some species one or other of the ducts may atrophy. The pancreatic duct is the biggest of the two and opens into the duodenum with the bile duct at the major duodenal papilla. The accessory duct opens on the opposite aspect of the duodenum at the minor duodenal papilla.

Pancreatic juice discharges into the duodenum through ducts. It is alkaline as it contains bicarbonate and chloride ions. Bicarbonate ions are actively transported into the duct lumen. Water follows passively by osmosis. The osmolarity of the pancreatic juice is equivalent to the osmolarity of the blood. Pancreatic juice is alkaline to neutralise the acidic gastric juice. This is advantageous because: It provides an optimal pH for the pancreatic enzymes and it prevents damage to the thin, absorptive mucosa of the duodenum. Its alkalinity also helps to buffer the large intestine which is important in hindgut fermenters.

The alkaline secretion contains digestive enzymes that can digest protein, carbohydrates and lipids. Digestion is discussed in the small intestine overview.

The following table lists the enzymes secreted by the pancreas and their effects:

Functional units are the islets of Langerhans, which are embedded throughout the exocrine tissue. Cells of the islets produce hormones that maintain normoglycaemia. Glucagon raises the blood glucose level and insulin decreses the blood glucose level. Somatostatin acts in a paracrine fashion to inhibit both glucagon and insulin secretion. Pancreatic polypeptide is thought to be a cholecystokinin antagonist, and thus inhibits secretion of pancreatic juice.

See here for more information on Glucagon and Insulin. 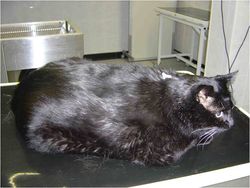 A condition characterised by an inability to maintain normoglycaemia, with persistent hyperglycaemia observed. Clinical signs include: glucosuria, polyuria and polydipsia - blood glucose concentration exceeds the renal threshold (~10mmol/l) and is excreted into the urine. The increased osmotic potential of the filtrate draws water into the filtrate which is lost in the urine. The animal drinks more to compensate for water loss. Polyphagia and weight loss are also seen where the animal compensates for persistent loss of glucose. Ketosis and ketonuria are also seen, where ketones are released for energy.

Types of diabetes in dogs

β cell deficiency - The majority of cases of diabetes mellitus seen in dogs are of this kind. It causes an inability to produce insulin. It can be caused by congenital defects, pancreatitis and autoimmunity.

Insulin antagonism - Seen in females in dioestrus, or in animals with Cushing's (hyperadrenocorticism). Progesterone, growth hormone and cortisol are insulin antagonists.

Types of diabetes in cats

Insulin Dependant Diabetes Mellitus (IDDM); insulin deficiency - similar to human diabetes type 1. There is a failure to produce insulin. This can be caused by islet-specific amyloidosis or chronic pancreatitis leading to β cell destruction.

The pancreas receives its blood supply from the coeliac and cranial mesenteric as branches from the splenic, hepatic and superior mesenteric arteries. The right lobe receives blood from the cranial pancreatoduodenal artery; a branch of the hepatic artery. The left lobe receives blood from the splenic artery and caudal pancreatoduodenal artery; a branch of the cranial mesenteric artery. Vessels aborize within the connective tissue septa and give off rich capillary networks that surround each acinus and invade each islet. The endothelium in the exocrine pancreas is continuous, whereas the endothelium of capillaries surrounding the islets in the endocrine pancreas are fenestrated. The pancreas is drained by veins that open into the portal vein. The islets receive ample blood supply to enable an appropriate response to blood glucose level. 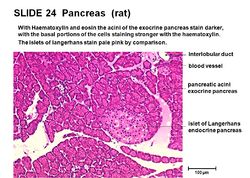 The exocrine pancreas consists of acini, which resemble bunches of grapes. Each acinus consists of a single layer of 40 - 50 pyramidal epithelial cells surrounding a lumen. The epithelial cells produce the secretion (pancreatic juice) containing enzymes, ions and water. The cells become wider during active secretion. The base of the acinar cells are strongly basophilic owing to the presence of endoplasmic reticulum, where there is a high concentration of RNA. This part of the cell therefore stains darker with haematoxylin and eosin. The apex of the cells is abundant with secretory granules containing the zymogen precursors of the pancreatic enzymes. The number of secretory granules increases after fasting, and decreases after a meal.

In the endocrine pancreas, the islets of Langerhans are embedded in the exocrine tissue. Each islet is composed of 2 - 3 thousand epithelial cells. The epithelial cells are arranged in a compact structure that is pervaded by a capillary network. A thin layer of reticular fibres separates the islets from the surrounding exocrine tissue. There are four different cell types within the islets of Langerhans that each produce different hormones, they include:

α cells- Produce glucagon, typically located at the periphery of the islet. They are not present in all islets.

β cells- Produce insulin. The predominant cell type, located in the centre of the islet and contributing to 70% of all cells.

δ cells- Produce somatostatin. There are low numbers in all islets.

F cells- Produce pancreatic polypeptide and are few in number, they may be present in the exocrine tissue also.

Carnivores have a pancreas that is clearly distinguishable as a body and left and right lobes. The portal vein runs dorsally between the left and right lobes. The left lobe is smaller than the right. The tip of the left lobe contacts the left kidney and lies in the greater omentum. The right lobe follows the descending duodenum and lies in the mesoduodenum. Dorsally, it is related to the visceral surface of the liver and the ventral surface of the right kidney. Ventrally, it is related to the descending duodenum. Laterally it is related to the ascending colon. In dogs, both pancreatic and accessory ducts persist throughout development. However, the pancreatic duct is smaller. It joins the bile duct just before opening into the major duodenal papilla which lies 3-6cm distal to the pylorus of the stomach. The accessory duct is the bigger duct and opens 3-5cm further distally to the pancreatic duct. The two ducts communicate inside the pancreas.

In cats, the distal part of the accessory duct atrophies during development, so only the pancreatic duct persists. Cats normally have pacinian corpuscles in the interlobular tissue that are visible grossly being 1-3cm in diameter. Dogs and cats produce little pancreatic juice between meals, but lots during a meal.

The pancreas of a ruminant consists of a distinguishable short body and left and right lobes. The left lobe lies in the retroperitoneal space and is in contact with the liver, diaphragm and major vessels dorsally. Ventrally, it is in contact with intestines and dorsal sac of the rumen. The right lobe is larger and lies in the mesoduodenum against the flank of the animal and runs part of the length of the descending duodenum. The portal vein passes dorsally at the pancreatic notch between the left and right lobes. In the ox, the distal part of the pancreatic duct atrophies during development, so only the accessory duct persists. The accessory duct enters the duodenum 20 to 25cm distal to the entry of the bile duct. In sheep and goats the distal part of the accessory duct atrophies during development, so only the pancreatic duct persists. It unifies with the bile duct so that both enter via a common duct. There is a constant secretion of pancreatic juice.

The pancreas consists of a large body and left lobe, with a much smaller right lobe. The portal vein perforates the pancreas. The distal part of the pancreatic duct atrophies during development, so only the accessory duct persists. Two thirds lie to the left of the midline. The right portion lies adjacent to the descending duodenum and its cranial border contacts the liver. The left portion is related to the spleen, cranial pole of the left kidney and the fundus of the stomach.

Click here for information on pathology of the pancreas