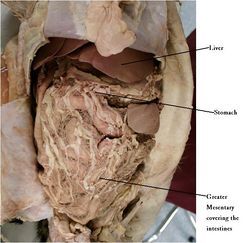 The enlarged swelling of the gastrointestinal tract between the oesophagus and the duodenum is called the stomach. It is a simple structure in carnivores and a compound structure in ruminants.

The stomach functions as a reservoir of food where digestion occurs through chemical and mechanical processes. This allows food to be broken down further and absorbed.

The gut tube is formed from the folding of the splanchnopleure (mesoderm and endoderm). The endoderm is the inner layer forming the epithelia and glands. The layers around it are from the mesoderm forming the skeletal muscle, (oesophagus and anus), smooth muscle (from lateral plate mesoderm) and connective tissue.

The region enlarges and a swelling indicates where the stomach will form. The dorsal surface becomes convex to form the greater curvature of the stomach and the ventral surface becomes concave to form the lesser curvature. Two rotations of 90 degrees occur along the longitudinal axis and then the dorso-ventral axis. The dorsal mesogastrium becomes elongated (with the spleen) and expands into a large fold along the ventral abdominal wall. This becomes the greater omentum which covers all the abdominal organs. It is a superficial structure which is free to move. The ventral mesogastrium becomes the lesser omentum. It is in between the stomach and the liver. The rest of the ventral mesentry degenerates. 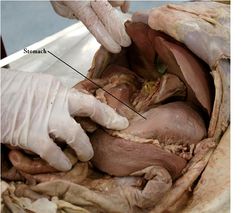 The stomach is split into regions: cardia, fundic, body and pyloric. The entire stomach is motile. It has a pH of 0.9 to 1.5. 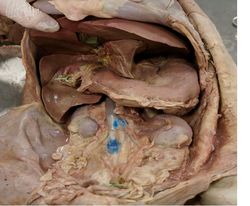 The fundus is a blind dome rising above the cardia. The body extends from the cardia ventrally and the pyloric part is on the right divided into a more muscular and a less muscular half. The serosa (external peritoneum) covers the entire organ.

Contractions start near the cardia and spread distally, accelerating and becoming more vigorous as they reach the pyloric region. The pyloric sphincter is open for 1/3 of the time during contractions. The empty stomach lies completely within the rib cage and does not contact the abdominal floor. Little secretion is produced and only small peristaltic contractions occur. Once food is offered or anticipated, the secretions begin.

The stomach is supported by 4 folds of peritoneum: 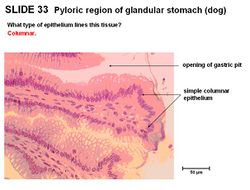 The monogastric stomach has a columnar epithelium. The folded mucosa of the stomach forms longitudinal rugae. The folds form invaginations called gastric pits which are continuous with gastric glands.

Layers of the stomach

The 4 layers of the stomach wall are:

There are 3 layers of muscularis: the outer longitudinal, middle circular and inner oblique. The pyloric sphincter is a thickened tunica muscularis from the middle circular smooth muscle layer. In the fundic region, the tunica muscularis is thinner, the glands are straight and the gastric pits are shallow. There is also an abundance of parietal and chief cells in the gland. In the pyloric region, the tunica muscularis is thicker, the glands are coiled and the gastric pits are deep. The cardia is a narrow muscle strip. Lymphatic vessels are present in the submucosa.

The stomach contains basophilic chief (zygomatic) cells that secrete pepsinogen in response to vagus nerve stimulation and gastrin release. Pepsinogen unfolds and cleaves itself (autocatalyses) in response to hydrochloric acid, therefore only in acidic environments. 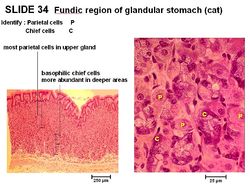 There are also parietal (oxyntic) cells found in gastric pits that secrete hydrochloric acid. This secretion aids digestion by activating gastric enzymes, e.g. pepsinogen to pepsin. Hydrochloric acid kills microorganisms and enzymes that enter with food. Hydrochloric acid is secreted in response to vagus nerve stimulation or pepsin secretion. Parietal cells are large and pyramid shaped, with a higher abundance in the upper region of the glands. 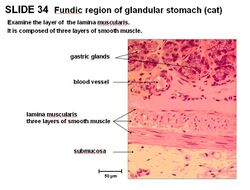 Stomach glands are short, coiled, branched and tubular. They need to be replaced due to wear and tear and are only found in the mucosal layer.

The digestive enzymes include;

They are secreted as an inactive zymogen, activated by hydrochloric acid. Active pepsin is produced and completed near the brush border to generate small peptides and individual amino acids. It starts in the stomach and continues into the small intestine.

Carbohydrases, e.g. amylase, are within salivary and pancreatic secretions and act to produce disaccharides. Disaccharides are converted to monosaccharides near the brush border. Cellulases are digested by symbiotic micro-organisms in the (ruminant stomachs).

The release of gastric secretions is under hormonal (gastrin), paracrine (histamine) and neural (ACh) mediator control in the cephalic and gastric phases. Gastric secretions are inhibited during the intestinal phase by CCK and secretin.

The size of the non-glandular region in the simple stomach varies between species. It is largest in the horse, pig and then smallest in the dog. 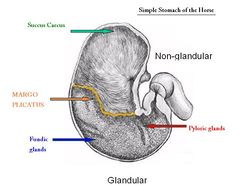 A region called the margo plicatus is present which separates the glandular and non-glandular parts of the equine stomach. The non-glandular area is lined with squamous epithelium (not columnar). The stomach is relatively small (10% GIT) with a strong cardiac sphincter which prevents the animal from vomiting. The equine stomach is rarely empty, retention time is short and expulsion into the duodenum stops when feeding stops. A 500kg horse can produce 30l of gastric juice in 24 hours.

The stomach is of variable size ranging from 0.5 to 6l according to breed. A full stomach can touch the bladder. The subglandular layer of fibroblasts and collagen fibres are for protection, e.g. from consuming bones. It is between the glands and the lamina muscularis. A 25kg dog can produce 0.5 to 1l gastric juice in 24 hours.

The cardia is thickened, taking up nearly half the area of the stomach. The internal diverticulum is present, which can be seen externally.