Different hormones, neurotransmitters and reflexes are involved in the complicated process of feeding in animals. Secretions and motility of the gastrointestinal tract are stimulated and carefully regulated by numerous factors, including environmental stimuli and the presence of food in different parts of the gastrointestinal tract from the oral cavity right through to the intestines.

When a harmful substance is ingested the body acts to eliminate it in different ways to prevent the animal becoming ill, for example, through vomiting and diarrhoea. If one or more of the pathways in controlling feeding is damaged or inhibited, then problems such as obesity occurs.

There are a number of feeding methods, including absorption over the body surface, filter feeding, mucous trapping, fluid feeding, piercing and sucking, cutting and biting, seizing prey, the use of jaws, teeth, beaks and the use of toxins.

Functions of the GIT

The main function of the GIT is to efficiently breakdown feed to the essential nutrients that can then be absorbed. The GIT then acts to propel the waste fed material out of the body. The following constitute this main function:

The secretion of enzymes and co-factors for digestion including water, ions and mucous
Motility for forward propulsion, mechanical breakdown, mixing of ingesta and sphincter tone
Migrating myoelectric complex to prevent debris accumulation
Peristalsis
Haustration
Segmental motility
Blood flow to muscles, submucosa and epithelial surfaces to sustain secretion, motility and the uptake of products of digestion and growth and repair.

Control of the GIT

The control of motility is intrinsic. It uses muscle pacemaker cells (Cajal cells) to set a basic electric rhythm (BER) of 3-20 per minute. It passes through gap junctions and an action potential is created, producing a slow wave of contraction. The likelihood of an action potential is increased through the stretch of food in the lumen and chemical food stimulation.

Endocrine, paracrine or neural signals enter the enteric nervous system via sensory neurones. The neurons interact with plexuses in the GIT wall. The myenteric plexus controls muscle movement and the submucosa plexus controls secretion and blood flow. The two plexuses are connected by interneurones to co-ordinate control. The autonomic nervous system is superimposed.

Excitatory neurotransmitters are parasympathomimetic. They include: ACh (muscarinic M1 and M2), Serotonin and Substance P.

Inhibitory neurotransmitters are sympathomimetic. They include: Vasoactive intestinal polypeptide (VIP), Nitric oxide (NO), ATP and Enkephalins.

The presence of food in the GIT is detected by open chemoreceptors. Signals to the endocrine cells or via the autonomic nervous system (ANS) releases gastrointestinal peptide hormones . These hormones act to promote secretion, provide negative feedback or affect motility. Closed mechanoreceptors also act to alter secretions. Conditioned (associative) and unconditioned responses act via the ANS. 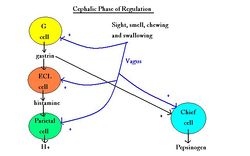 This phase is an unconditioned reflex. It is stimulated by the sight, smell and taste of food. It involves the vagus nerve (CN X) and parasympathetic fibres that synapse in the submucosal plexus. Gastrin is secreted from the endocrine cells in the pyloric mucosa. Postganglionic fibres activate chief, parietal, mucous and G cells. Histamine is secreted due to paracrine action. There is an increase in stomach motility by release of hydrochloric acid and pepsinogen. It is a short phase and overlaps with the gastric phase of secretion. It is inhibited by stress and increased by aggression. 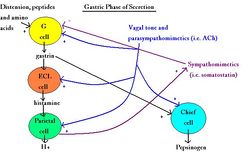 Chemical and mechanical receptors in the stomach respond to stretch and chemical stimulation by an increase in the pH of gastric contents. It is a response to undigested materials, especially proteins. Histamine and gastrin are released. It is a negative feedback loop by sympathomimetic somatostatin released by paracrine method to inhibit gastrin secretion (when pH falls below 3). The submucosal and myenteric plexuses are activated in vagus reflex arcs causing the postganglionic release of ACh at parietal cells. The neural response and presence of peptides in chyme stimulates gastrin release. Parietal and chief cells stimulate via gastrin acting in the bloodstream. It is a long response. 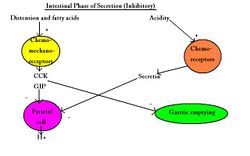 Chyme in the duodenum inhibits acid secretion and motility by decreasing the stomach distension and increasing the stretch of the duodenum leading to the enterogastric reflex. A drop in pH below 4.5 causes release of secretin which inhibits parietal and chief cells and stimulates buffer release from the pancreas. Chyme causes the release of secretin, GIP and CCK decreasing gastric secretions and motility. 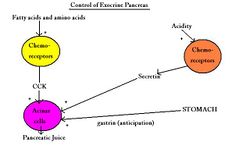 Involves secretin, GIP and gastrin. Controlled by vagal tone and the parasympathomimetic reflex.

The anatomy of the equine stomach, the close proximity of the exiting duodenum and the entering oesophagus along with the well developed cardiac sphincter, make it difficult for the horse to vomit. However on rare occasions it does occur.

Click here for more information on The Vomit Reflex.