The right kidney is to be found ventrally to, and between, the last 2 ribs and first lumbar transverse process. Cranially it touches the liver and caudally it is attached to the pancreas and the base of caecum. The duodenum winds around its lateral and then ventral surfaces. Medially is the caudal vena cava and adrenal gland.

The left kidney is between the last rib and 3rd transverse process. Its ventral surface is almost completely covered by the peritoneum and contacts the small intestine and and small colon. The spleen contacts it cranioventrally. Medially is the left [[Equine Endocrine System - Horse Anatomy#Adrenal Glands|adrenal gland] and aorta.

The Basic Components of the Kidney

A tough outer capsule surrounds the parenchyma and this prevents the kidney expanding.

The renal cortex is the outermost layer of parenchyma, it lies just beneath the renal capsule. The renal cortex is comprised of two parts, peripheral zone and the inner juxtamedullary zone. The cortex contains the following parts of the nephron:

The renal medulla is the inner layer of renal parenchyma. In the horse, medullary pyramids and their papillae are completely fused to form a renal crest; hence they are said to have a unilobar type of kidney. The medulla can be split into two parts, the outer and the inner. Different parts of the nephron reside in these areas.

The outer medulla can be further divided into the outer and inner stripe.

The outer stripe contains the straight proximal tubules and the inner does not. However the inner contains thin ascending limbs and the outer does not. This difference makes up the anatomical demarcation between the two stripes.

The inner medulla only contains the following parts:

The kidney receives approximately 25% of cardiac output. Each kidney is supplied by a renal artery, which is a branch of the abdominal aorta. The renal artery subsequently divides at the hilus of each kidney into interlobar arteries, which run to the corticomedullary junction. Here they branch into arcuate arteries. The arcuate arteries then give rise to interlobular arteries which radiate into the renal cortex. The interlobular arteries become the afferent arteriole and subsequently the capillary loops of the glomerulus. These capillary loops then unite to become the efferent arteriole, which supplies a capillary network around the nephrons. This capillary network drains blood from the renal cortex into the interlobular veins, arcuate veins, then interlobar veins. The interlobar veins drain into the renal veins, which subsequently drain into the caudal vena cava.

Lymphatic vessels are satellite to the blood vessels. The drain first to the renal lymph nodes, before terminating in the lumbar lymph nodes. 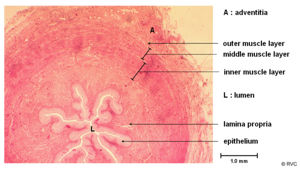 The ureters convey urine from the renal pelvis to the bladder. There are two of them, one for each kidney. The ureters run retroperitoneally along the roof of the abdominal cavity and then enters the pelvis. Once entering the pelvis it moves medially in the broad ligament of the female or the genital fold of the male. It ends at its junction on the dorsolateral surface of the bladder within the lateral ligament. The ureter then runs intramurally (within the bladder wall) before opening into the bladder lumen at slit-like openings known as ostia.

The wall of the ureters has an internal mucosa layer formed from transitional epithelium. This provides protection against the urine. The middle layer is a muscularis layer. This is well developed for peristalsis, though can enter into spasm on irritation. The outer layer is composed of adventitia. In the horse, the wall in the proximal urethra contains mucous-producing glands.

Junction with the Bladder

The ureter enters the bladder obliquely near the neck of the bladder and runs between the muscular layers and mucosa. They open through 2 slits on a raised hillock.

The movement of urine along the ureters is achieved by peristalsis which is powered by locally regulated smooth muscle. This maintains a low pressure in the renal pelvis.

The bladder is where urine is stored before being expelled by the body through the micturition reflex. Without a bladder urinary continence would be impossible.

The bladder is a hollow, muscular organ. It is divided for descriptive purposes into three parts:

Its wall comprises a muscle layer covered in transitional epithelium. Its size and posistion are determined by how full it is. When empty the mucosa of the bladder wall is wrinkled and thicker. The bladder rests on the pubic bones, entirely within the pelvis and is largely retroperitoneal. When full and distended, the mucosal folds disappear and the wall appears thinner, it then becomes intraperitoneal. There are two folds (plicae uretericae) that do not disappear, even when the bladder is distended; these extend from the ureteral opening to the neck of the bladder before folding to become the urethral crest.

The trigone of the bladder gets its name as it looks like a triangle without a base. The trigone is bounded by the plicae uretericae. It is believed to have increased sensitivty and is of different embryological origin to the rest of tissue. More details can be found here. 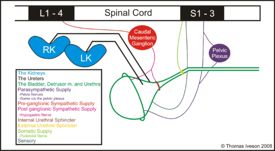 Lymphatics of the bladder drain into the iliosacral lymph nodes

This muscular tube is the connection between the bladder and the external environment and plays a vital role in conscious urinary continence.

The Layers of the Urethra

The layers of the walls of the urethra are largely similar to those of the bladder apart from one significant difference; in both the male and the female the urethral submucosa has a network of veins which may contribute to continence by forming a kind of erectile tissue.

The urethra empties at the external urethral orifice on the ventral wall of the vagina. This is often at the vestibulo-vaginal junction. Only urine passes through the female urethra. In the horse, the urethra is short and wide.

A schematic overview of the path of the male urethra

The urethra empties at tip of penis. The male urethra carries urine, semen and seminal secretions from the accessory sex glands. The uretha is divided into 3 parts:

The combination of the pre-prostatic and prostatic portions are called the pelvic portion.

Muscles of the Urethra

Innervation of the External Urethral Sphincter

The urethralis muscle receives somatic innervation originating from S1-S3 and continuing via the pudendal nerve. This releases the neurotransmitter Acetylcholine, which binds to nicotinic Acetylcholine receptors and mediates skeletal muscle contraction of the external urethral sphincter. This is important in urine retention.