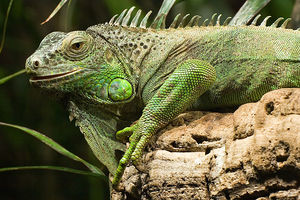 Iguana iguana is a large, diurnal lizard. It is among the largest of the New World lizards, with males reaching lengths of 180 cm, more than half of which is tail. (Larger males can reach up to 2 metres in length and weigh up to 8 kg). Females rarely grow larger than 120 cm. The tail, which can be used in a whiplike fashion for self-defence, carries distinct dark bands. There is also characteristic dark marking to the shoulder area of most specimens. All green iguanas have an enlarged scale beneath their tympanums and prominent nuchal, vertebral and caudal crests. The spines on some male specimens become so large and tall that they flop over to one side of the back or the other. Also, because they are active, arboreal lizards, green iguanas have strong claws to aid them in climbing. One other striking physical feature is the massive dewlap on their throats. These dewlaps are used for territorial displays and are fully exposed when the iguanas engage in head bobbing, or when the lizards are in sunlight and are maximising the surface area of their bodies to absorb warmth.

Male green iguanas can be distinguished from females by their enlarged femoral pores. Both sexes possess 12-13 femoral pores located as a row along the ventral aspect of each thigh; these glandular structures secrete a waxy substance with which they mark their territory and identify each other. In addition males reach larger sizes and have larger crests, jowls and tympanic scales.

As hatchlings, this species is a bright green colour, sometimes with banding or blotches. As they mature, most iguanas fade, often a golden orange in males and an olive colour in females. These bright colours are particularly noticeable when the animals are mature and in breeding condition. Adults of both sexes often have a bluish cast to their heads.

Green iguanas are found in tropical and subtropical regions. They range from northern Mexico to southern Brazil and Paraguay. They also occur on several islands in the Lesser Antilles. Within the United States, escaped and intentionally released pets have established "wild" populations in South Florida, the lower Rio Grande valley of Texas and sections of Hawaii.

For hatchling iguanas a 100-130 litre terrarium with a screen top is ideal. They will soon outgrow this though and a larger terrarium is then needed. As iguanas grow, vertical space should be provided for climbing. Either glass or wooden terrariums are suitable. Thick branches and limbs are necessary for climbing.

Paper and carpets are suitable substrates. Commercial reptile carpets are another alternative. Avoid bark, walnut shell and corn cob bedding which may be ingested, causing an impaction.

A temperature gradient must be provided for the iguana. This can be accomplished by hanging full-spectrum incandescent basking lights at the top of the cage, where the iguana cannot come into direct contact with them. Thermometers should be placed in the warm area, the cooler area and the basking area to monitor and regulate the temperature.

At night a separate heat source must be utilised. Ceramic heating elements provide a source of overhead heat without producing light. Under tank heating pads can work well if used correctly.

Full-spectrum fluorescent lighting is essential. As well as assisting in calcium metabolism, these lights provide other physiological benefits. There is no substitute for natural sunlight. Portable, outdoor basking cages are excellent. These cages should be mostly wire, with areas of shade for the iguanas to retreat if they become too warm. The beneficial UV rays of natural sunlight are filtered out through glass and to a lesser extent through window screens.

The green iguana is primarily a herbivore throughout its life. A regular feeding schedule is very important, especially during the early years of an iguana's life, when it is growing at a rapid rate. As hatchlings, iguanas should be fed once or twice a day. Animals over two years of age can be fed less often.

A major proportion (40%) of a good iguana diet should consist of a variety of dark, leafy greens. Three or four different greens can be fed per meal. These greens could include collard greens, parsley, mustard greens, the dark leaves of romaine lettuce, bok choy, Swiss chard, turnip greens, escarole, and dandelion greens. Spinach and beets should be fed less frequently, and in smaller amounts, than the other greens listed. Cruciferous vegetables (including cabbage, broccoli, cauliflower, kale and Brussels sprouts) should be fed in only very small amounts or not at all.

Other vegetables should make up another 40% of the diet. These vegetables should include a combination of summer squash, sprouts, zucchini, carrots, fresh corn, green beans, pea pods, okra, cooked sweet potatoes, mixed frozen vegetables (thawed) and peppers. These vegetables should be chopped into appropriate sized pieces and mixed together. By chopping and mixing the iguanas can also be offered the flowers and leaves of some plants. Beware that there are numerous toxic varieties; safe flowers include hibiscus, roses, geraniums, nasturtiums, squash blossoms and carnations. Shredding of the food reduces the chance that they can push away one type of food in preference for another.

A selection of fresh fruit should make up at least 20% of the diet. Calcium rich fruits are good to feed and include papayas, mangoes, raspberries and figs. Other fruits to be fed in smaller amounts include apples, melons, plums, cantaloupes, peaches, blueberries, pears, grapes, cranberries, tomatoes, kiwis, guavas, strawberries and bananas.

Both sexes lead solitary lives and are territorial in the wild, except during the mating season. Mature iguanas tend to socialise and mate in January to February, and after a period of gravidity lasting about two months, the female digs in moist sand or soil, usually near the base of a tree, and deposits between 10 and 60 eggs.

Gravid females appear very fat and lumpy with eggs. An egg laying area must be provided for them. A 30-45 cm deep area of loose, moist, sandy soil provides the best nesting material. Without an appropriate egg-laying site, dystocia will occur.

The eggs should be removed and placed in an incubator as soon as possible. The appropriate incubation temperature is 30ºC. The eggs should rest half buried (don't turn them) in moistened vermiculite (one to one and a half parts water to one part vermiculite, by weight) while the other half is exposed to air. The incubator should be opened every three to four days to allow for the exchange of air within. At this time, any infertile, moulding eggs can be removed. The eggs should hatch in approximately 80 days, but this may change (range 59-90 days) due to varying incubation temperatures or humidity. The neonate iguanas should measure 25 cm long and weigh 10-12 g. They begin feeding within a couple of weeks of hatching. Growth is very rapid, ranging from 30-60 cm per year, and sexual maturity is usually reached by the third year.