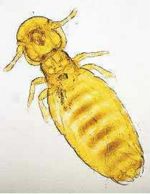 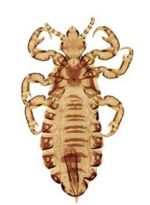 Lice are obligate ectoparasites of every avian and most mammalian species. They are only a few millimeters long and like fleas, are wingless but unlike fleas are dorsoventrally flattened.

Lice are host specific, permanent parasites which cause pediculosis. The louse saliva and faeces contain allergenic substances which cause irritation, rubbing, licking and skin damage leading to decreased host productivity.

There are two main groups of veterinary importance, the Mallophaga (chewing lice) and Anoplura (sucking lice)

Chewing lice are also known as biting lice. They have a broad head, and the thorax narrower than the head. These lice have rasping mouthparts, and feed on epithelial scales, scabs, feathers and other bodily debris.

Species occur on both mammals and birds.

Sucking lice have a narrow head, and the thorax wider than the head. They have powerful legs, and piercing mouthparts, used to feed on blood and tissue fluids. Heavy infestations can cause anaemia.

Species occur only on mammals.