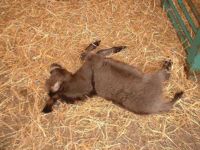 A foal may be orphaned because of its dam’s death, rejected due to antagonistic behaviour or undernourished by an inadequate milk supply. Alternative means of maintenance must be found until at least five months of age.

Finding a nurse mare has many advantages, but they are rarely available. A mare that has just lost her foal is ideal. Success depends on a number of variables affecting the mare-to-foal relationship, including:

There are a number of ways to help avoid or overcome rejection of a foster foal:

Observe the mare and foal when first left together. Some mares and foals are best kept separated by a partition. This will allow the sight and smell of each other, but will protect the foal.

If unsuccessful on the first encounter, re-introduce after a short period of time, as success may be achieved after further attempts. If the mare is still showing an antagonistic response after ten to twelve hours then the chances of success are poor.

Colostrum must be given within the first twelve hours of life; the first feed should be within two to three hours of birth. The recommended amount is 250 mls every hour for the first six hours, making a total of 1.5 litres. Absorption rapidly falls after 3 hours of age so foals should be encouraged to nurse as soon as possible, if in doubt the foals IgG levels can be measured 16-20 hours after birth.

In a case of rejection of the foal, obtaining the colostrum from the mother would be preferable, or it could be taken from another mare within two days of giving birth. A healthy mare should have enough for 250 mls to be taken off after her own foal has suckled although it is useul to check colostral quality first using a refractometer. Clean hands and the mare’s udder before milking and sterilise all utensils.

Colostrum from a cow is not ideal, although if fed in large quantities it would be better than having none.

Collect colostrum and freeze at -15° to -20°C. Store in 250 ml batches, when required; defrost slowly in hot water until it reaches 38°C.

If the foal has received no colostrum, or IgG levels are measured at <800mg/dL then plasma (preferably hyperimmune) must be administered intravenously during the first twelve hours of life. Catheter placement and plasma administration is usually performed under sedation. Good levels of sedation in the donkey foal have been achieved with IV diazepam at 0.1-0.25mg/kg.

If a mare is not producing enough milk for her foal, the mare's diet can be supplemented while she is in lactation. To try to increase milk production, the following methods may be successful:

There may be no alternative but to hand rear. Consider:

The foal can be given covering antibiotics for the first few days if desired; although this is a matter of preference and is not generally advocated.

This is time-consuming, but it is preferred. Could be used in the transitional period before a foal is trained to drink from a bucket. Lambs’ teats are the closest in shape and pliancy to those of a donkey mare.

If the foal rejects the teat, place an index finger in its mouth and, if it does not suck, move the finger against the roof of the mouth. Slowly replace the index finger with the teat once sucking begins. Be patient. Keep the bottle in an upright position.

Less time-consuming once the foal has been trained, but it is much harder to introduce than the bottle. It is usually best started when the foal is two weeks or older. Milk should be offered ad lib in a wide, shallow bucket placed at head height. It should be replenished twice daily, and the bucket cleaned thoroughly.

To train, place your fingers into the foal’s mouth and, as it begins to suck, slowly lower your hand into the bucket of milk. It may be necessary to push the foal’s head down to show it the bucket. At worse, it may take a whole day for a foal to learn to drink from a bucket.

Sometimes a weak foal needs to be fed via nasogastric tube. Insertion of the tube can be quite difficult, and great care must be taken during placement to ensure that the tube is in the oesophagus. A "portex" male urine catheter 20 F can be use to intubate donkey foals but ensure the end is capped to avoid aerophagia. This can be secured into place. As gastric intubation is a risk factor for gastric ulceration in foals the use of Omeprazole (GastroGard®, Merial Animal Health Ltd, UK) may be indicated (although note Gastrogard® is not licensed for use in foals under 4 weeks of age). Donkey foals should be accurately weighed and care taken with dosing of any drugs.

Warm milk to 38°C for initial feeds, gradually reducing to air temperature over the first week. Changes should always be made slowly over 24 to 48 hours.

The recommended volume of milk for a healthy foal is 100 ml/kg body weight per day. For a 10 kg foal this means one litre of milk a day, i.e. 10% of its body weight.

A foal naturally sucks from its mother about seven times a day. Ideally it should be fed at two or three hourly intervals, although during the first week it is preferable to feed every one to two hours. If the foal is sick, it may be unable to tolerate more than 50 to 100 ml every hour, so more intensive rearing is required. As it improves this volume can gradually increase to 200 ml an hour.

Day 3 to 7: Increase the volume of each feed to 150 - 200 ml (25% of body weight). Reduce the number of feeds to about eight a day, feeding every two to three hours. Milk-based pellets can be offered from one week old. From 3 weeks old this can be supplemented with Top Spec Comprehensive balancer, introduced slowly up to 100g/kg.

Weeks 2 and 3: Give 300 - 350 ml at each feed, reduce to six feeds a day on a four-hourly basis. Allow access to fresh water and salt, and consider training to bucket feed. The foal may pick at the straw bed and allow a limited quantity of good quality hay/haylage and access to grazing to start the foal weaning.

Week 4: Feed 500 ml five times a day. Do not wean off milk until eating adequate dry food. The changeover should be gradual to allow the digestive enzymes to adapt.

Week 8 to 12: Weaning can be progressed during this time. Give one litre of feed, four times daily at eight weeks, then three feeds a day at twelve weeks. The foal may still be taking half a litre of milk a day. A hand-reared foal should be fully weaned by five months of age.

Types of milk to consider

Mare’s milk: This is obviously the best option for the foal, but is not always readily available. Milking a mare is very time-consuming.

Cow’s or goat’s milk: This is much easier to obtain but not similar in composition. It contains higher total solids, fat and protein but is considerably lower in sugars. The need to mix powders is avoided, but it can be expensive, particularly with regard to goat’s milk.

Goat's milk is considered to be good foster milk as the fat particles are smaller than in cow's milk and so it is more easily digested, it also seems very palatable.

Cow’s milk can be made to resemble mare’s milk more closely by adding one teaspoon of honey to a pint of 2% fat milk. Jersey milk must not be used due to its high fat content.

Cow’s milk may contain a surprising number of bacteria so it is advisable to pasteurise it by heating to 70°C for 15 seconds.

Human formulae should be avoided, as they are not well tolerated by the foal’s gastrointestinal tract. However, there is experience in developing countries of human milk being used with no reported problems.

Poor milk replacers can cause stunted growth. It should also be noted that following the manufacturer’s guidelines may cause dehydration and constipation. It may best to use 12.5% solution of replacer, giving 10% of the foal’s body weight and slowly increasing by day 10 to 20% body weight.

There are many brands of artificial milk available for foals, just 'google' foal milk replacer. Some are listed here: 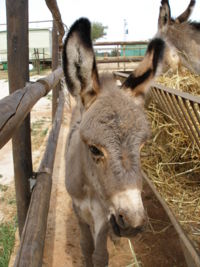 Image courtesy of The Donkey Sanctuary

Lactose intolerance diarrhoea can be found mostly secondary to intestinal damage caused by an infectious agent and can be identified rapidly as it responds to the removal of the milk and returns when milk is fed again. Oral lactase therapy has been used in donkey foals. 4-6 drops PO q 4h of Colief® (Crosscare Ltd)

The milk substitute should be withdrawn and replaced with a solution of 50 g glucose in 500 ml warm, boiled water for one or two days. The return to milk should be gradual, alternating with the solution. The number of feeds per day should be increased with the same total daily consumption. Consideration should be given to supplementing with lactobacillus paste during dietary changes.

Intolerance to the milk substitute causes colic, diarrhoea and/or bloat. This could also indicate gastroduodenal ulceration, so antiulcer medication should be considered. Decreasing the volumes or increasing the frequency can be tried, or change to an alternative source.