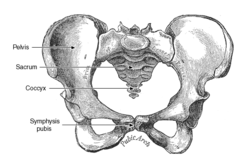 The pelvic girdle consists of two symmetrical halves. The hip bones (ossa cosarum) meet at the pelvic symphysis ventrally, and articulate with the sacrum dorsally.

The ilium is craniodorsal and extends obliquely forward from the hip to articulate with the sacrum. The cranial wing varies between species. Dorsally, it forms the sacral tuber, which is more prominent in larger animals than in dogs and cats. Ventrally, it forms the tuber coxae, or the point of the hip. The margin of the wing is known as the iliac crest and the body is deeply excavated for attachment of the gluteus medius. The greater sciatic notch on dorsal border of the wing, is cut away at its junction with the shaft, to allow the sciatic nerve passage en route to the hind limb.

The pubis extends medially from the joint to form the cranial pelvic floor. It is L-shaped to give two branches; cranial (acetabular) and caudal (symphysial).

The ischium is caudal and forms most of the pelvic floor. The ischial tuberosity is formed by the caudolateral corner of the horizontal plate of the ischium. The pelvic symphysis comprises both the pubis and the ischium .

The Acetabulum provides the socket to the joint of the hip, and is composed of all three bones of the pelvis. 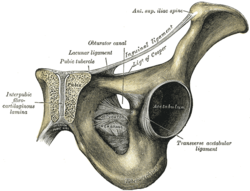 Pelvic Symphysis: secondary cartilaginous joint that ossifies with age and may expand in parturition.

Sacroiliac joints: synovial joints combined with fibrous joints. They transmit the weight of the trunk to the hindlimbs.

Larger species have a more vertical ilium, bringing the sacroiliac joint (and with it the weight of the trunk) closer to the hip. Smaller species have an oblique ilium. The dog has a stout cord extending between the sacrum and lateral ischial tuberosity, this is not present in the cat. In ungulates, the sacrosciatic ligament expands to a broad sheet.