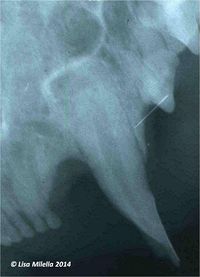 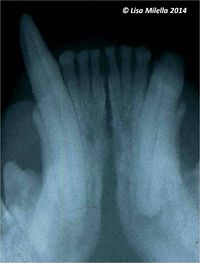 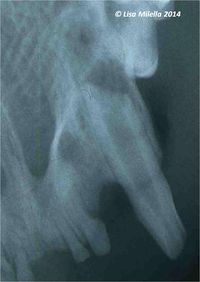 Radiographs may provide information about the presence, nature, and severity of periapical and root pathology. This information is essential for the diagnosis of endodontic disease as well as for the prognosis of its treatment. Radiographs do not provide direct information about pulp health; however, many of the effects of pulp pathology are radiographically visible.

Clinical findings that may indicate the presence of endodontic disease include a fractured tooth with exposure of the pulp chamber, a discolored tooth, or an intraoral or extraoral draining fistula. Except in the obvious case of a direct pulp exposure, a definitive diagnosis of endodontic pathology is difficult to make based only on clinical examination of veterinary patients due to the limitations of pulp testing and lack of patient input.

Radiographs should be made of teeth that are fractured, close to a draining fistula, intrinsically discolored, anomalous, or compromised from periodontal disease to determine the extent of the problem and to evaluate the endodontic and periradicular health.

Inflammation caused by endodontic disease affects the surrounding bone and teeth, resulting in changes that can be radiographically detected. Radiographs that are meant to evaluate the periapical tissues should include the entire root tip and surrounding bone, be well positioned to avoid elongation, foreshortening, angulation, or distortion of the image.

Radiographic signs of endodontic disease that are associated with the tissues around tooth roots include:

Radiographic signs of endodontic disease that are associated with the tooth itself include:

Endodontic lesions in cats appear radiographically similar to those in dogs.


Lucencies That Can Mimic Endodontic Lesions

Apical radiographs can be challenging to interpret due to the two-dimensional depiction of complicated anatomy that combines trabecular (spongy) bone, compact bone, soft tissue, and air spaces all projected at various angles and configurations. Other confusing lucencies and opacities can be created by the summation effect of superimposed structures, projecting overlying anatomy in a way that makes it appear to be associated with a tooth root or its supporting bone. These can include bony foraminae, bony fissures, bony canals, and trabeculae. Many non-pathological lucencies, opacities, and apparent deviations from normal can be distinguished from true lesions by comparison with a radiograph of the contralateral tooth.