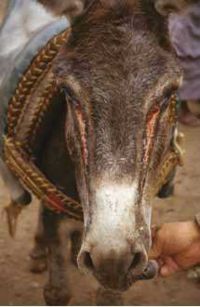 This donkey shows the typical bilateral habronemiasis lesions extending from the medial canthus of the eye down the side of the face. In these cases lacrimation may be an important primary factor but individuals are probably genetically susceptible and are affected each year. (Image courtesy of The Donkey Sanctuary) 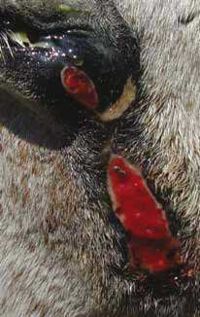 Facial habronemiasis. This condition occurs seasonally and affects the facial skin in particular. Wounds and other inflamed and exudative skin lesions can be contaminated when the carrier fly deposits the larvae in the site. It is sometimes possible to identify the larvae in washings and scrapings from the site. (Image courtesy of The Donkey Sanctuary)

Habronema muscae, H. majus and Draschia megastoma are frequently reported spirurids in donkeys (Pandey et al, 1994). Although the adults are considered to be non-pathogenic, the formation of large granulomas/tumours in the stomach by D. megastoma may interfere mechanically with its function. These lesions are frequent findings in the fundus region of the stomach of donkeys, often protruding into the lumen.

The life cycle involves an intermediate host, such as the stable fly, Stomoxys calicitrans, or the housefly, Musca domestica. The sprurid and the fly develop synchronously after the fly maggot has ingested larvae in the faeces. H. muscae and D. megastoma develop in the housefly, while H. majus develops in the stable fly. By the time the young fly is ready to seek a host the larvae become infective. The larvae are released onto the skin as the fly feeds and are ingested by the animal during grooming. Infection can also occur if the fly is swallowed. Only larvae gaining direct access to the stomach complete their development.

Diagnosis of stomach-worm infection is difficult because the eggs are not observed in routine faecal examination.

Cutaneous habronemiasis (summer sore) is a seasonal, granulomatous skin disease caused by aberrant Habronema larvae. It is caused by house and stable flies depositing infective larvae on moist mucous membranes or pre-existing skin lesions. Deposition of larvae in existing wounds is a major problem in the tropics among working donkeys. The problem is common during warm weather coinciding with the period of high fly activity. Body parts that commonly have wounds, moisture or discharges, i.e. lower limbs, back, girth and belly, mucocutaneous junctions such as sheath, prepuce, penis, lips, muzzle, eyelids and medial canthus of the eye, are common sites of lesions in donkeys (Getachew, 1999). In donkeys the facial form and the conjunctival forms are the most common.

Habronema infection is seen occasionally and it should be borne in mind when presented with a pruritic mass near the medial canthus of the eye. Flies act as the vector so incidence is highest during the summer months. The condition is highly seasonal, with individual animals being affected in sequential years. Other animals seem to be singularly resistant and never succumb. This implies a familial/genetic susceptibility. A degree of hypersensitivity is probably involved but little enough is known about the disease in horses, let alone donkeys.

Diagnosis is usually based on a combination of environmental factors (season, location) and the characteristic appearance. However, washings taken from the ulcerated area with warm saline under mild pressure and collected into a Petri dish usually reveal the larvae in considerable numbers.