Volatile fatty acids are the main energy source for ruminants, providing approximately 70% of the total energy requirements. They are used primarily by the microorganisms for reproduction and growth, with the excess production being used by the ruminant itself. 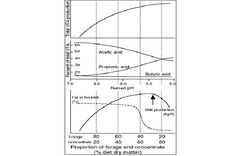 50-60% of VFAs produced is acetic acid. It predominates on a high roughage diet and is a precursor for mammalian milk fat. Some is also used for muscle metabolism and body fat. The molecular formula is, CH3.COOH.

12-18% of VFAs produced is propanoic acid. It predominates on a high concentrate diet and provides energy via the conversion of blood glucose in the liver. It is used in lactose (milk sugar) synthesis. The molecular formula is, CH3.CH2.COOH.

18-20% of VFAs produced is butyric acid. It provides energy to the rumen wall and is used in milk fat synthesis and for body fat, when excess energy is present in the diet. It doesn't vary in proportion to other volatile fatty acids, therefore has little influence in milk fat content. The molecular formula is, CH3.CH2.CH2.COOH.