From WikiVet English
Eructation
Jump to navigation Jump to search

Eructation is the release of gases from the stomach through the oesophagus. Carbon dioxide, methane, hydrogen and other volatile products are produced in the rumen through the fermentation of food by microorganisms and most of these gases are then released through eructation.

Not all of the carbon dioxide produced in the rumen is released through eructation. Some of the gas is absorbed directly over the rumen wall. If gas release does not occur, or gas elimination does not equal gas production, a condition called bloat will arise. 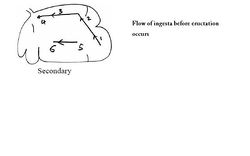 The process of eructation includes ruminal contractions (no reticular contribution). Before eructation can occur the cardia must be cleared of liquid ingesta, as the cardia is reflexly closed on contact with the liquid rumen contents. Contractions start in the ventral sac and spread to the dorsal sac. Contractions spread caudally to cranially over the rumen. Ruminal gas is forced towards the cranial cardiac area where it is aspirated into the oesophagus. The gases are moved orally by an antiperistaltic wave passing through the relaxed pharyngoesophageal sphincter into the pharynx. Some of the eructated gas passes to the lungs, whilst the rest is released from the oral cavity.

In the dairy cow, 0.5-1 L of gas is produced per minute in the ruminoreticulum. The exact amount of gas absorbed into the blood and lymph is unknown, but the majority is eliminated by eructation.