The liver has two lobes. It is dark brown coloured (except just after hatching where it is yellow). The right lobe is larger than the left lobe. It is positioned ventral and caudal to the heart (as there is no diaphragm). It is closely associated to the proventriculus and spleen. It has a thin capsule and indistinct lobation. Two bile ducts enter the distal duodenum, one from each lobe of the liver. The duct from the right lobe is connected to the gall bladder. Hepatic lobules are indistinct (except near hilus) due to a lack of perilobular connective tissue. Avian bile aids the emulsification of fats and contains amylase and lipase. 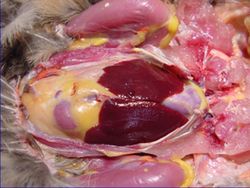 Anatomy of the Liver(Avian)- Copyright RVC 2008

The avian liver has polyhedral and angular cells that are larger than mammal cells. The cells have a large, spherical nucleus and the base of the cell forms the wall of the sinusoid. The cell apices communicate with the bile canaliculi. They have a granular cytoplasm.

Liver cords form columns around the interlobular bile capillary. The cell arrangement is simpler than in mammals. The sinusoids anastamose freely. There are Kupfer cells present. Fibres include, reticular fibres to support the liver cords and elastic fibres in the capsule and vessels.