From WikiVet English
(Redirected from Bones and Cartilages - Horse Anatomy)

The following section will concentrate on anatomy specific to the horse. For general skeletal anatomy, follow links in blue. In anatomical planes we use the term palmar for forelimb and plantar for hindlimb. These terms are all interchangable depending on whether you are referring to the fore or hindlimb.

The scapula is roughly triangular in shape and flat. It lies against the thoracic wall in a cranioventral direction. It does not form a true articulation with the trunk, instead forming a synsarcosis; meaning it is attached by only muscle. The dorsal border points towards the spinal column and joins the scapular cartilage. The scapular cartilage is crescent shaped, enlarging the area of attachment for muscles of the scapula as well as acting as a shock absorber. This cartilage ossifies, thus becomes more brittle, with age. In the horse, the cartilage extends caudally to the level of the withers; which is extensive compared with other species.

The lesser and greater tubercles on the lateral and medial sides of the proximal humerus, respectively, are almost equally well developed. Both tubercles divided into two parts (cranial and caudal). The tubercles are separated by an intertubercular groove, which is wide and has a central saggital ridge (intermediate tubercle). This ridge fits into a depression on the deep surface of the biceps tendon and restricts movement of the tendon relative to the humerus in the standing horse. The body of the bone bears the teres major tuberosity on its medial surface and the deltoid tuberosity, which is opposite, on the lateral surface. The distal end forms a cylindrical condyle that transfers weight to the radius. On the lateral aspect of the condyle there is a small saggital ridge with grooves to allow articulation with the radius and ulna. The medial and lateral epicondyles and lateral supracondylar crest are palpable landmarks. A shallow radial fossa is just proximal to the condyle on the cranial surface. The deeper olecranon fossa, between the two epicondyles, lies opposite the radial fossa on the caudal surface. There is no supratrochlear foramen between the two fossae in horses.

The two bones are fused, so all movement is in a sagittal plane, with very little pronation and supination. The fusion of the two bones is interrupted by interosseous space in the proximal third of antebrachium, which serves as a passage for blood vessels.

The ulna tapers out distally at the mid antebrachium. For the proximal quarter of the radius, the bones are joined by ligaments. It appears as a separate ossification centre in a foal until it fuses at about a year old. The olecranon tuberosity is located on its proximal extremity. 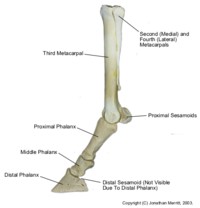 Lateral (side) view of the bones of the equine forelimb, distal to the carpus.

Metacarpal III is robust and well developed, as it has to bear the entire weight transferred through the limb. The distal end of the bone has an articular surface comprised of two condylar areas separated by a saggital ridge, which engages with a groove in the proximal phalanx. This ensures only sagittal movement of the fetlock. There is also a transverse ridge leading to two radii of curvature. The proximal aspect of metacarpal III has articulating facets on its palmar side, where the splint bones articulate. It has a metacarpal tuberosity on the dorsomedial surface of the proximal end.

The splint bones are held to metacarpal III by strong ligaments which are usually ossified and can lead to lameness if there is excessive bone production. The bones curve away distally from the main shaft and end in rounded nodules, which are important palpable landmarks (buttons of the splint), approximately a 1/3 to 3/4 of the way down metacarpal III.

The pelvic girdle is formed by two hip bones which are joined ventrally at the cartilagenous pelvic symphysis and articulate dorsally with the sacrum. The three components of each hip bone are the ilium, pubis and ischium. The bone that articulates with the hip bones to form the hip joint is the femur.

Within the equine ilium, the tuber coxae is visible and an important palpable landmark. The iliac crest is thin and concave whilst the ileal wing is orientated in an vertical manner. The pubis has a pubic groove that crosses the ventral surface of the iliopubic eminence towards the acetabulum. In the groove lies the accessory ligament of the head of the femur. Specifically in the stallion, a dorsal pubic tubercle exists. The ischium has an ischial tuberosity that is linear in shape whilst the ischial arch is shallow and irregular.

The femur has a notched femoral head that is wedge-shaped and opens towards the medial side of the head. The apex of the fovea on the femoral head serves as the point of attachmentfor the ligament of the head of the femur. At the base of the fovea is the accessory ligament from the prepubic tendon; which has most of its fibres originating from tendon of insertion of the rectus abdominis muscle. The femoral neck is indistinct in the horse, continuous laterally with greater trochanter; which is divided into a smaller cranial and larger caudal part. The caudal part of the greater trochanter extends beyond the the dorsal limit of the femoral head and ventrally contributes to lateral border of trochanteric fossa. The medial border of trochanteric fossa is formed by the lesser trochanter. The horse has an extra process called the third trochanter that is situated on the lateral aspect of the proximal third of the femoral shaft and allows the superficial gluteal muscle to insert here. The third trochanter is also the origin of the superficial digital flexor muscle. The trochanteric fossa has a raised lateral edge known as the lateral supracondylar tuberosity, where the lateral head of the gastrocnemius arises. The medial and lateral condyles at the distal ends of the femur are separated by the intercondylar fossa. Both condyles extend to form trochlea, the medial ridge of which is larger than lateral ridge and provides a tubercle projecting proximally. This large medial protuberance is critical in the patellar locking mechanism of the stifle. The trochlea also provides a gliding surface for articulation with the patella.

The patella is roughly triangular in shape with a base proximally and apex distally. Medially there is patellar fibrocartilage. The articular surface is divided by a saggital ridge, which fits between groove of the femoral trochlea. The articular surfaces of the femoral trochlea and the patella are further divided by transverse ridges into large gliding and small resting surfaces. When the resting surfaces of patella and the trochlea are in contact, the patella rests on the proximal end of the trochlea; this occurs when the horse bears weight equally on both hindlimbs.

As in other species, the tibia bears the weight transferred through the hindlimb and the fibula is rudimentary.

The proximal articular surface of the tibia is roughly triangular in shape. An intercondylar eminence prodtrudes from the centre of the triangle. The apex of the triangle is formed by the tibial tuberosity where the three tendons of insertion of the quadriceps muscle attach. The craniolateral border has a deep extensor groove and the base of the triangle (faces caudally) is divided by a popliteal notch. The popliteal notch continues to form a prominent popliteal line on the caudal surface which provides a attachment for the popliteus muscle. At the distal end of the tibia are two grooves separated by a ridge known as the cochlea, which is bounded by medial and lateral malleoli on each side. The lateral malleolus is formed, developmentally, from the distal end of the fibula.

The head of the fibula articulates with the lateral condyle of tibia. It tapers distally to end approximately halfway down the tibia.

The tarsal bones are arranged in three rows: proximal, middle and distal.

As for metacarpals, see above description.