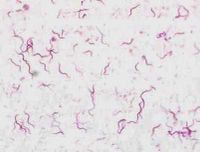 Brachyspira pilosicoli is a Gram-negative, spiral shaped bacterium. It is an anaerobic spirochaete, closely related to Brachyspira hyodysenteriae. The bacterium is loosely coiled and is 6-11µm long (Figure 1). It is only weakly haemolytic in contrast to B. hyodysenteriae.

The bacterium may have 8-12 internalised flagellae, inserted at either pole of the cell between the inner and outer membranes. The outer membrane contains lipopolysaccharide (endotoxin). This pathogen can also cause zoonotic disease in people.

Infection of B.pilosicoli is acquired via ingestion of contaminated faeces. Once in the Alimentary tract, the spiral rotating motion allows the bacterium to move through the mucus in the intestine and thus reach and invade its target cells in the large intestine. The organism remains infective for long periods in organic matter but is inactivated by sunlight.

The pathogen has been isolated from dogs, birds, mice and humans. Dogs are thought to be a source of infection for people.

B. pilosicoli is the cause of porcine intestinal spirochaetosis which is a much milder disease than the swine dysentery caused by Brachyspira hyodysenteriae.

The presence of the spirochaetes in diarrhoeal faeces is not itself diagnostic because related, but non-pathogenic, species may be present.

The attachment of B. pilosicoli to epithelial cells of colonic mucosa causes oedema, shedding of epithelial cells, haemorrhage and leucocyte infiltration and leading to malabsorption. The invasion of goblet cells can also lead to secretory diarrhoea.

Toxins and proteins released by B. pilosicoli have haemolytic and cytotoxic effects. Its membranous LPS also contains an endotoxin (lipid A).