The trachea bifurcates at the levels of the 4th-6th intercostal space, approximately halfway between the thoracic inlet and the diaphragm. It divides into two principle bronchi, tubes which conduct air into the lungs, and they divide into two lobar bronchi for the left lung, and into four lobar bronchi for the right lung. These further divide into smaller bronchi and bronchioles within the lung tissue.

The structure of the larger bronchi is identical to that of the trachea. On the smaller bronchi the C-shaped cartilage rings are gradually replaced by irregular plaques of cartilage. Bronchioles have no cartilage at all. The bronchioles are less than 1mm in diameter, and undergo further divisions, the last of which is characterised by the loss of goblet cells.

Between species the diameter of the bronchi and bronchioles vary greatly and more significantly than the variations of the trachea. The number of bronchial divisions before bronchioles are present varies by species - small mammals such as mice may have only 4/5 generations, whereas 12+ may be necessary in larger animals. Avian respiration is very different to that of mammals. The respiratory systems of non-homeotherms are also very different to that of mammals. 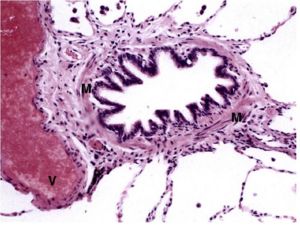 The histology of the bronchi is almost identical to that of the trachea. The lumen of the bronchus is lined by a pseudostratified epithelium, including goblet cells and serous cells. Beneath the narrow layer of connective tissue under the epithelium lie well-developed spiral bands of smooth muscle.

The Bronchioles have no cartilage rings but have well developed muscular walls to enclose the lumen. The epithelium is reduced to cuboidal, and in the normal animal it contains no mucus secreting glands. There are many lymphoid nodules beneath the epithelial layer.

The respiratory bronchioles have few alveoli scattered along the length, at the entrance of which is simple squamous epithelium, and bronchial smooth muscle bundles.

Click here for information on pathology of bronchi and bronchioles