A large number of cases of IPF have been diagnosed post-mortem at The Donkey Sanctuary. There is chronic fibrosis of the sub-pleural and interstitial lung tissue. As yet the aetiology is undetermined. A progressive on-going irritation to the lung is likely to be responsible, but whether this is allergic or toxic is unclear.

The clinical signs depend on the stage of the disease and are similar to that of RAO, with tachypnoea and dyspnoea. There may be nostril flare and, rarely, a cough is heard. Auscultation of the lungs reveals a variety of adventitious sounds. 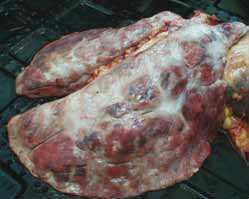 It is difficult to diagnose the condition with certainty ante-mortem, but lack of response to treatment often indicates pulmonary fibrosis is present. Despite the chronic nature of the disease, a number of animals present with an acute dyspnoea, regardless of therapy; these carry a very poor prognosis for survival despite therapy.

At post-mortem the lesions vary in severity from focal areas of fibrosis to large areas of generalised fibrosis with severe sub-pleural fibrosis. Airway inflammation is usually limited to the areas of collapsed and fibrosed lung, unlike the widespread inflammation seen in RAO.

Treatment to optimise remaining lung function is similar to that as described for RAO, and may be required for life. Secondary bacterial bronchitis is a common feature of IPF and antibiotic therapy is often required.