The early signs of RAO (or chronic pulmonary obstructive disease, summer pasture-associated obstructive pulmonary disease or heaves) are often missed in donkeys as they are not usually exercised and appear to have a relatively insensitive cough reflex. There is airway sensitivity to allergens found in inhaled organic dusts, which leads to an influx of neutrophils into the airways, accompanied by bronchospasm and mucus accumulation.

The disease is seen more in middle-aged to older patients.

Early in the disease the clinical signs may be mild, with coughing only noted at exercise. As the disease progresses there is an increase in respiratory rate, nostril flaring and coughing at rest. Auscultation of the lungs reveals wheezing and crackles or, in a severely affected case, no noise is heard due to severe airway obstruction.

A blood sample is useful to evaluate the white cell count and determine whether antibiotic therapy is required.

A tracheal wash can also be useful to assess cell types and the degree of inflammation present. However, the procedure can be very stressful for a dyspnoeic animal and can lead to panicking. 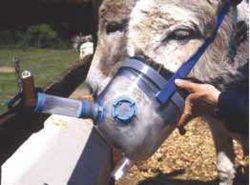 Nebulizer in use (Image courtesy of The Donkey Sanctuary)

Management must first address improvement in air quality by increased time turned out in fields, and reduced exposure to dust. There is a wide variety of suitable feeds and bedding available.

Drug therapy relies mainly on the use of anti-inflammatory medication, bronchodilators and mucolytics (Durham, 2001; Robinson et al, 2001). Corticosteroids are the anti-inflammatory drug of choice: prednisolone may be used orally; dexamethasone may also be used i.v. or orally.

The risk of side effects is reduced if the steroid is administered by inhalation using an equine inhalation device. Donkeys appear to tolerate these well. Drugs used and the dosages are extrapolated from those used in horses (beclomethasone, fluticasone). The drugs are best used after some dilation of the peripheral airways has been encouraged by prior therapy with intravenous or oral dexamethasone and bronchodilator treatment.

Bronchodilator therapy is used to relax the small airways, the drugs most used being beta2 agonists, anticholinergics and methylxanthines. Clenbuterol is the most used beta2 agonist, either in oral form or intravenously.The drug may cause paradoxical worsening of acute crises (which should be managed with intravenous corticosteroids, diuretics, and an anticholinergic). Beta2 agonists are also available for administration via the inhaled route, e.g. salbutamol or salmeterol.

Anticholinergic bronchodilators include atropine and glycopyrolate. Atropine can be useful in acute cases i.v. However, overdose can lead to excitement and ileus. Glycopyrolate i.v. is an alternative with similar side effects. Ipratropium bromide inhaled is a safer alternative.

Methylxanthines, for example theophylline, have some bronchodilator activity but are less reliable.

Mucolytic drugs such as dembrexine improve the clearance of viscous mucus secretions and can be used as adjunct therapy. The loop diuretic frusemide is reported to have bronchodilatory effects in addition to reducing pulmonary oedema. It may be used intravenously or orally.

The mast cell inhibitor sodium cromoglycate has been used for prevention of RAO. It is available in human inhaled preparations.