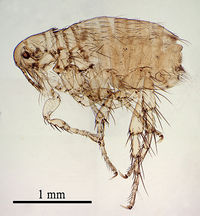 C. canis is very similar to C.felis, and of the order Siphonaptera. The first genal spine is 0.5 times the length of the second, and C. canis has a more rounded head than C. felis.

Again, very similar to C. felis. The eggs are produced soon after arrival on the host. They then hatch into larvae, which undergo two moults before entering the pupae stage. The pupae may remain dormant for a year or longer, and are stimulated to hatch by mechanical stimuli such as vibrations.

Under suitable conditions, the complete life cycle can take as little as 3 weeks.