A typical conjunctival form of histoplasmosis. Note the surrounding periorbital skin has been affected markedly by continued rubbing and exudate. (Image courtesy of The Donkey Sanctuary) 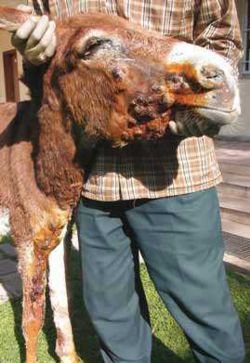 A typical case of cutaneous lesions. This donkey was treated at the DHWP clinic in Debre Zeit, Ethiopia (photograph courtesy of the DHWP). 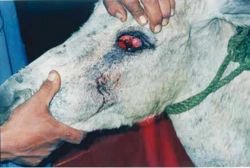 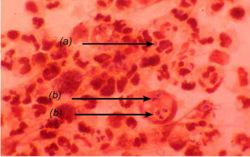 Smear from purulent exudate demonstrating oval-shaped bodies of H. cap. var. farciminosum found both (a) extra- and (b) intra-cellular.(Image courtesy of The Donkey Sanctuary)

Epizootic lymphangitis is a contagious, chronic disease caused by the dimorphic fungus, Histoplasma capsulatum var. farciminosum. This disease affects equidae, and occasionally camels, cattle and humans. Epizootic lymphangitis is endemic in parts of Africa, the Middle East and Asia and is believed to be spread by flies feeding on an open wound or from soil contamination of wounds. However, the exact mode of transmission has yet to be fully determined.

Morbidity can be high when animals are frequently gathered together, for example, the ghari (cart) horses found in urban areas of Ethiopia such as Debre Zeit. Spontaneous resolution of disease after a prolonged time period sometimes occurs (Al-Ani, 1999).

For many years it was thought that H. farciminosum was not a major pathogen of donkeys, but recently the organism appears to have adapted to the donkey. Both cutaneous and ocular forms of the disease occur in donkeys. The infection is spread directly from animal to animal and by vector contact. For the most part the condition is highly (if slowly) progressive with involvement in particular of traumatised skin (such as the region of the hocks and hind legs).

The condition is largely restricted to horses. However, the Donkey Health and Welfare Project (DHWP) (A project collaboration supported by The Donkey Sanctuary and based in the Faculty of Veterinary Medicine, Debre Zeit, Ethiopia in Ethiopia ) treated 34 cases of epizootic lymphangitis in donkeys over an 18-month period. These were predominantly of the cutaneous form. An increased incidence of disease in donkeys has paralleled that in horses and mules (B. Endebu, personal communication).

Rare cases of infection in humans have been reported. Therefore, care should be taken when handling infected animals.

Epizootic lymphangitis can resemble glanders caused by Burkholderia mallei, ulcerative lymphangitis caused by Corynebacterium pseudotuberculosis or sporotrichosis caused by Sporothrix schenckii. In some parts of Egypt lacrimal histoplasmosis is a common manifestation of the infection (Saleh, 1989; Heragy, 2003). The condition starts with slight conjunctivitis and epiphora. This progresses to blepharospasm and photophobia as the eyelids and lacrimal sac become severely inflamed. Chronic conditions may present with purulent nasal discharge from the affected nostril and fistulation of the lacrimal duct.

This condition follows a similar pattern in donkeys to that described in the horse. In both, cutaneous and ocular, forms it presents as an ulcerating, pyo-granulomatous dermatitis, tracking along lymphatic vessels which become extensively inflamed. The resulting response causes local exudation and thickening. These lesions are evident mainly in the legs, neck and chest. The condition can also occur as a multifocal pneumonia and as an ocular form with keratitis and conjunctivitis.

The cutaneous form is found predominantly on areas of repeated skin trauma such as harness contact points. The early signs include one or more dermal or subcutaneous nodules. They are usually free of pain when palpated but they can be oedematous and palpation can be resented. Later cords and ulcers develop with discharging tracts that tend to follow cutaneous and subcutaneous lymphatics.

Treatment is extremely difficult, requiring repeated and persistent surgical drainage of every identifiable nodule. Dressing of the resulting cavity with strong iodine solution and oral dosing with potassium iodide daily for 30 to 40 days seems to be the best approaches at present. In theory, amphoteracin or fluconazole systemically should be helpful, but it is seldom feasible in places where the disease occurs.