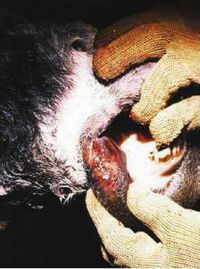 Glanders. A granulomatous lesion in the lip of a donkey (photograph courtesy of U.S. Animal Health Association).

Glanders is a contagious and often fatal disease of horses, donkeys and mules caused by the bacterium Burkholderia mallei. The infection is transmitted via ingestion of the bacteria or contamination of skin abrasions. The bacteria can survive in the environment for up to two months. Humans can acquire the infection, which is usually fatal. Glanders occurs in Asia, Africa and the Middle East. It was last reported in the UK in 1928.

The disease tends to be more acute and of higher mortality in donkeys and mules compared to the chronic course of skin ulcers and nodules typically seen in horses. Three forms of the disease are generally recognised (Radostits, 2000):

In donkeys and mules the main presenting signs can be (Vetstream, 2004):

Euthanasia is usually recommended due to the contagious nature of the condition, the zoonotic potential and the specific disease control legislation and strategies in place in many countries. Strict biosecurity when handling infected animals is mandatory. Vaccines are not currently available for this condition.