From WikiVet English
Giardia
Jump to navigation Jump to search 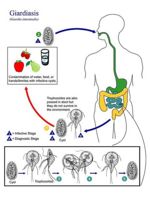 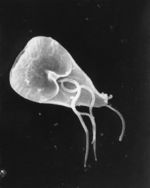 Giardia cyst - Courtesy of the Laboratory of Parasitology, University of Pennsylvania School of Veterinary Medicine

These protozoan parasite are found in humans as well as wild and domestic animals. They are a common cause of severe diarrhoea as part of the clinical symptoms giardiasis.

Giardia spp. are flagellate protozoa with 8 flagella, 6 of which emerge from the body and are used in motility. They are 15-20μm long, pear shaped with a flat ventral surface. The most unique feature of this protozoa is the presence of a large adhesive disk in the flat surface that is used for attaching to the intestinal mucosa.