From WikiVet English
Giardiasis
Jump to navigation Jump to search

Giardia is a binucleate, flagellate protozoa that causes enteric infection giardiasis in dogs and occasionally cats and reptiles. Giardia species have been reported to be found in 1-39% of faecal samples from dogs and cats, with a higher rate of infection in younger animals. Transmission is via cysts that are shed in the faeces, and may be direct or indirect. Indirect water-borne transmission is the most common modality and is favoured by cool, moist conditions that prolong cyst survival. Once cysts are ingested, motile trophozoites are released and attach to the cells of the small intestinal mucosa via an adhesive disc. Predilection sites in the dog are the duodenum and jejunum, whereas only the duodenum is favoured in cats. Multiplication by binary fission can then occur, and trophozoites encyst to a stage adapted for survival in the external environment. Cysts are seen in the faeces from day 3 post-infection in dogs (5-16 in cats), and can survive in the environment for several months. Animals that mount an immune response to Giardia can eliminate infection; however, the immunity acquired does not necessarily prevent re-infection after a short period.

Giardiasis is a condition of significant zoonotic concern. Although the cat protozoa G. felis seems to be species-specific, dogs can host both the canine-specific G. canis and G. lamblia (characterised by twin eye-like anterior nuclei), which has zoonotic genotypes. It is not known how important dogs are as a reservoir for human Giardia infection, or how frequently zoonotic transmission occurs. G. lamblia is the protozoa most often involved in reptilian infections, so should be considered a zoonotic risk. In man, Giardia may cause acute diarrhoea, particularly in immunocompromised individuals. Subclinical infections also occur. Therefore strict hygiene should be employed to prevent faecal contamination. 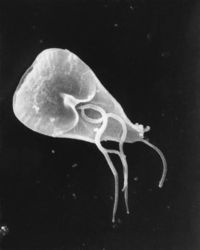 Dogs are more commonly affected than cats. There are no age, breed or sex predispositions for Giardia infection, but puppies and kittens are more likely to contract clinical disease than adult animals. Disease may also be seen in immunocompromised or stressed individuals.

Many other pets, including small mammals, reptiles, and livestock can be infected and a source of environmental contamination.

Clinical signs are most likely to be seen in younger or immunocompromised animals, as healthy, older hosts are usually infected asymptomatically. Signs vary from acute, chronic or intermittent diarrhoea to chronic loose, fould-smelling faeces, and frequency of defaecation is usually increased. The stools are normally light coloured and mucoid and often contain fat. Blood is not normally present in the faeces. Vomiting, flatulence and weight loss/failure to gain weight may be seen in some cases, and the hair coat may be poor. Giardiasis may also cause malabsorption, and there are several proposed mechanisms for this. For example, the small intestinal villi may be grossly atrophied or damaged ultrastructurally, or giardiasis may lead to bacterial overgrowth. There is also evidence that Giardia consumes bile acids, preventing digestion of fats.

Diagnosis is confirmed by demonstrating Giardia antigen, trophozoites or cysts in the faeces. The simplest method is to examine fresh faecal smears for cysts (and occasional trophozoites), but sensitivity is improved by using concentration techniques. Centrifugal flotation in zinc sulphate solution or sugar flotation solution are both appropriate, but zinc sulphate solution is preferred as it causes minimal distortion to cysts. In this technique, faecal material is centrifuged and saturated with zinc sulphate mixture before the fluid from the top of the tube is placed on a microscope slide. Diff-Quik or Lugol's iodine are used to stain cysts and trophozoites, a coverslip is applied, and the slide is examined under the microscope. Although infrequently detected, Giardia trophozoites are approximately 8 x 15 micron tear-drop shaped organisms which contain two nuclei. They can sometimes be seen to move in a "falling leaf" pattern. Cysts are around 12 microns long and, if not distorted, oval in shape. When looking for cysts, three samples collected at two to three day intervals should be examined as shedding is intermittent.

Commercial ELISA tests are now available for the detection of Giardia antigen in faeces. These include the Snap Giardia test from IDEXX and the ProSpectT/Giardia ELISA from Alexon-Trend.

The above tests may also be performed using duodenal aspirates obtained by endoscopy.

Gross lesions are not normally found at post-mortem examination. Giardia trophozoites may be seen in the lumen following intestinal biopsy.

It is particularly important to treat giardiasis in animals owing to its zoonotic potential. In the UK, fenbendazole is licensed for use against Giardia. Metronidazole may also be used in dogs and cats but it is important to confirm the respective doses. However, metronidazole is only 67% effective in dogs and has a bitter taste. A combination of febantel, praziquantel and febantel (Drontal Plus) can be used in dogs. Metronidazole is the recommended treatment for reptiles. Following treatment, it is advisable to repeat faecal examinations to confirm the efficacy of treatment and to detect re-infection. As well as drug therapy, thorough cleaning and disinfection of the environment and the animal's belongings is essential. Shedding of cysts can be difficult to detect and so in contact animals may be treated concurrently.

A vaccine comprising killed trophozoites has been developed and is available in the USA for use in dogs and cats. The vaccine decreases the excretion and viability of Giardia cysts, thus reducing the environmental burden.

Treatment is usually effective and the prognosis for treated giardiasis in dogs and cats is good. However, chronic infection may lead to debilitation.