Structure of the Heart 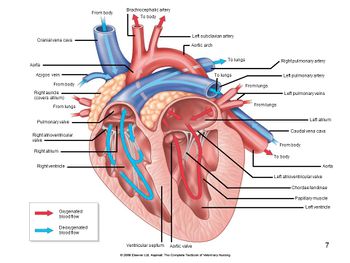 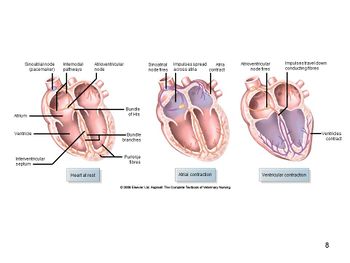 Position and Shape of the Heart

The heart is located in the thoracic cavity in between the lungs, 60% of it lying to the left of the median plane. The heart’s lateral projection extends from rib 3 to 6. Most of the heart’s surface is covered by the lungs and in juveniles it is bordered cranially by the thymus. Caudally the heart extends as far as the diaphragm. Variations in position and size exist among individuals depending on species, breed, age, fitness and pathology. Roughly speaking, the heart is responsible for about 0.75% of the bodyweight.

The heart is cone-shaped, with a broad base at the top from which the large blood vessels enter and exit. The tip, known as the apex, points downwards and lies close to the sternum. The longitudinal axis of the heart is tilted to varying degrees depending on the species resulting in the base facing craniodorsally and the apex caudoventrally.

The pericardium is the membrane that surrounds and protects the heart. It is composed of two layers separated by a narrow cavity. The inner layer is firmly attached to the heart wall and is known as the visceral layer or epicardium. The outer layer is composed of relatively inelastic connective tissue and is termed the parietal layer. This fibrous layer prevents distension of the heart, thus preventing excessive stretching of the heart muscle fibres. The cavity between the two layers contains a small volume of fluid which serves as a lubricant, facilitating the movement of the heart by minimising friction. The sternopericardiac ligament connects the parietal layer to the sternum and the phrenopericardiac ligament joins the parietal layer to the diaphragm. The latter is present only in canine and swine.

Layers of the Heart Wall

The wall of the heart consists of three layers: the epicardium (external layer), the myocardium (middle layer) and the endocardium (inner layer). The epicardium is the thin, transparent outer layer of the wall and is composed of delicate connective tissue. The myocardium, comprised of cardiac muscle tissue, makes up the majority of the cardiac wall and is responsible for its pumping action. The thickness of the myocardium mirrors the load to which each specific region of the heart is subjected. The endocardium is a thin layer of endothelium overlying a thin layer of connective tissue. It provides a smooth lining for the chambers of the heart and covers the valves. The endocardium is continuous with the endothelial lining of the large blood vessels attached to the heart.

Although cardiac muscle fibres branch and interconnect with each other, they form two separate functional syncytia, one for the atria and another for the ventricles. The ends of each fibre in a network connect to its neighbours by irregular transverse thickenings of the sarcolemma called intercalated discs. The discs contain desmosomes, which hold the fibres together, and gap junctions, which allow ions to travel between cells and permit the rapid propagation of action potentials. Consequently, excitement of a single fibre of either network results in stimulation of all the other fibres in the network. As a result, each network contracts as a functional unit.

In addition to cardiac muscle tissue, the heart wall also contains dense connective tissue that forms the fibrous skeleton of the heart. The fibrous skeleton is composed of dense connective tissue rings that surround the four heart orifices. The skeleton contains fibrocartilage in which nodules of bones (ossa cordis) may develop in some species. Although these bones occur most commonly in cattle, they are not restricted to this species. The skeleton performs several functions:

Chambers of the Heart

The heart contains four chambers. The two upper chambers are the atria and the two lower chambers are the ventricles. On the cranial surface of each atrium is a pouch-like appendage called an auricle which is thought to increase the capacity of the atrium slightly.

The left atrium forms the dorsocaudal section of the base of the heart and is similar to the right atrium in structure and shape. It receives oxygenated blood from the lungs via the pulmonary veins. Blood passes from the left atrium to the left ventricle through the bicuspid or left atrioventricular valve. The left atrium lies under the tracheal bifurcation and enlargement of this area of the heart can cause breathing difficulties.

The left ventricle forms the apex of the heart and is conical in shape. Blood passes from the left ventricle to the ascending aorta through the aortic semi-lunar valve. From here some of the blood flows into the coronary arteries, which branch from the ascending aorta and carry blood to the heart wall. The remainder of the blood travels throughout the body.

Every last drop: squeezing the most from your diuretics

Management of congestive heart failure in dogs and cats

Heart murmurs: when should I investigate?

Treatment of feline cardiomyopathy: establishing the what, when and how?

How to Perform and Interpret Cardiac Diagnostics with Confidence

Is it Just a Puppy Murmur? Congenital Heart Disease in Dogs

The Basics: All you need to know about interpreting ECGs

Rabbit cardiology: everything you wanted to know about rabbit hearts but were afraid to ask

Oh no the heart failure cat! What now?

An approach to small furries with respiratory disease