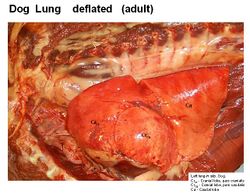 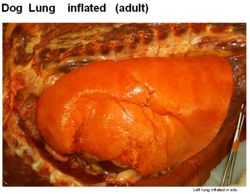 The lungs are the site for gaseous exchange, and are situated within the thoracic cavity. They occupy approximately 5% of the body volume in mammals when relaxed, and their elastic nature allows them to expand and contract with the processes of inspiration and expiration.

The lungs, along with the larynx and trachea, develop from a ventral respiratory tract. After separation from the developing oesophagus, two lung buds develop, which undergo divisions as they grow, forming the beginnings of the bronchial tree. This process is not completed at the time of parturition.

The left and right lungs lie within their pleural sac and are only attached by their roots, to the mediastinum, so they are fairly free within the thoracic cavity. The right lung is always larger than the left, due to the positioning of the heart. The apex of the lungs is their cranial point.

In most species, the lungs are divided into lobes by the bronchial tree:

The bulk of the lung consists of bronchi, blood vessels and connective tissue. The terminal bronchioles have alveoli scattered along their length, and are continued by alveolar ducts, alveolar sacs and finally alveoli.

These have alveoli which open on all of its sides, they have no 'walls' as such. Openings to individual alveoli are guarded by smooth muscle.

These are rotunda-like areas on the end of each alveolar ducts which are usually present in clusters.

Alveoli are minute, polygonal chambers, whose diameter changes with the processes of inspiration and expiration, and varies by species. The wall of the alveoli is extremely thin, consisting of 2 irregular layers of epithelial sheets, 'sandwiching' a network of capillaries. Thus the Blood-Gas Barrier at the thinnest portions is a tripartite structure consisting of the pulmonary capillary endothelium, a common basal lamina and the alveolar epithelium- ideal for gaseous exchange. The alveolar interstitium is formed from connective tissue fibres and cells, which include collagen fibrils and elastin fibres.

The main function of the lungs is gas exchange.

The pulmonary arteries follow the bronchi, while the pulmonary veins sometimes run separately. Bronchial arteries from the aorta supply the bronchi, and bronchial veins may drain this blood to the right atrium via the azygous vein. More often the blood from the bronchi drains directly to the left atrium.

Lymph drains to the tracheobronchial and mediastinal lymph nodes.

Pneumocytes are a type of epithelial cells that lines the alveoli.

The lungs of the horse show almost no lobation, and the right lung of the horse lacks a middle lobe. In comparison to this, the lungs of ruminants and pigs are obviously lobed. The fissures between the lobes (interlobar fissures) are deeper in the dog and cat lung compared to other species. Avian respiration has many fundamental differences to mammalian respiration. The respiratory systems of non-homeotherms are also very different to that of mammals.

Click here for more information on pathology of the lungs.