Key-Gaskell Syndrome refers to the clinical signs observed in cats with abnormal function of the sympathetic and parasympathetic nervous systems. It is similar to grass sickness in horses and, like this disease, it is often fatal.

The syndrome has occurred as outbreaks[1] in the past in the UK, continental Europe and occasionally in the USA. It was first described by Key and Gaskell as a 'puzzling syndrome' causing pupillary dilatation in cats at the start of a major outbreak in the UK in 1982[2]. It is currently described only sporadically but recent reports suggest that the incidence of the disease may be increasing again.

The cause of the dysautonomia is not known but numerous factors have been implicated and it is generally thought to occur after exposure to a toxin, possibly in dry food or vaccines [?reference]. As with grass sickness, it has also been suggested that toxins produced by Clostridium botulinum may be involved in the pathogenesis of the disease and a recent study showed that cats with the disease developed significantly higher titres of IgA antibody to botulinum toxins C and D than healthy controls[3]. Whatever the cause, degenerative lesions develop in the autonomic ganglia, intermedio-lateral columns of spinal grey matter and in the axons of the sympathetic neurones.

Historically, Key-Gaskell syndrome was reported most frequently in cats but the disease has now been shown to occur in dogs[4][5][6], particularly younger animals. There is no apparent sex predisposition but the Labrador Retriever breed may be predisposed to the development of dysautonomia.

In a recent study of 65 dogs confirmed as having dysautonomia, those raised and housed in rural environments appeared to be at greater risk (56/65 dogs) for dysautonomia than dogs from urban environments[7].

The sympathetic and parasympathetic nervous systems are involved in the regulation of multiple organ systems, particularly the gastro-intestinal tract and the secretory glands. Common clinical signs therefore include:

The most frequent clinical signs associated with the syndrome are depression, anorexia, constipation and regurgitation or vomiting. Incontinence (faecal and urinary) has been observed less frequently.

Oesophageal dilatation may be observed on plain radiographs of the chest. A 'trachea stripe sign' may also be visible due to the compression of the tissue between the oesophagus and trachea.

Oesophageal hypomotility may be evident with barium contrast study or using fluoroscopy to observe the dynamic passage of food boluses into the stomach.

Various provocative tests can be used to assess the autonomic nervous systems of animals with suspected Key-Gaskell syndrome: 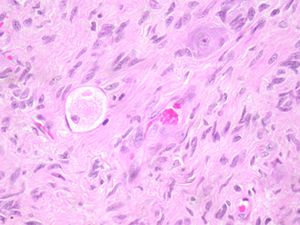 There are few differential diagnoses for this clinical presentation but, early in the course of disease, other causes of megaoesophagus should be considered.

Treatment may be attempted with parasympathomimteic drugs but is largely supportive.

Food should be provided from an elevated bowl or via a gastrostomy tube which can be left in place for several weeks if necessary. Total parenteral nutrition may be considered but this cannot be used as a long term option for nutrition and it is associated with many adverse effects.

Some dogs may show minor improvement on initiation of therapy with bethanechol or metoclopramide.

The prognosis is guarded or poor. Recovery rates in the cat are reported as 20-40% but it may take 2-12 months for the patient to recover fully. In the dog, recovery rates are lower. Even after making an apparent recovery, many animals are left with residual neurological deficits including intermittent regurgitation.