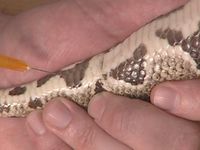 Biochemical analysis of blood is a useful diagnostic tool. It is often necessary to prioritise the components of a profile because of the small volume of blood submitted. Consider the following tests:

Plasma proteins include albumins (prealbumin and albumin) and globulins (alpha, beta and gamma fractions). Albumin is the principal factor in maintaining the oncotic pressure of blood. Antibodies migrate primarily in the gamma fraction. In normal reptiles, total protein (TP) values generally vary between 30–80 g/l; hypoproteinaemia and hyperproteinaemia are usually indicators of disease. Measurement of TP is an important diagnostic test but perhaps more useful is protein electrophoresis which separates the fractions. Ranges for protein electrophoresis are becoming available for bird and non-domestic mammal species.

Hypoproteinaemia is often associated with malnutrition. Other causes include blood loss, gastrointestinal problems, chronic hepatopathies or chronic renal disease. Physiological increases, primarily a hyperglobulinaemia, may occur in healthy female reptiles in active folliculogenesis due to the presence of the yolk precursor, vitellin, in the blood. Following ovulation the protein level returns to normal. Pathological increases in TP are usually associated with either dehydration or hyperglobulinaemia related to inflammatory, primarily infectious, disease. Alpha globulins may increase with tissue necrosis and decrease with severe hepatic disease, malnutrition and malabsorption. Beta globulins may increase with kidney disease.

Protein electrophoresis only requires a very small amount of plasma and may give very useful diagnostic data. Presently specific information in reptiles, let alone snakes, is limited. Extrapolation from results in mammals and birds may be of dubious value but early evaluation shows it to be comparable.

Some species may have higher concentrations of Aspartate aminotransferase (AST) in liver, skeletal muscle and myocardium. AST values are usually less than 250 iu/l. Increased levels are suggestive of tissue damage, specifically liver or muscle in some species. In association with CP to rule out muscle damage it is a useful test in some species for hepatocellular damage. Generalised diseases, such as trauma, septicaemias and toxaemias, may also elevate AST due to tissues necrosis.

Creatine kinase (CK, creatine phosphokinase, CPK) is derived predominantly from skeletal muscle and heart. Normal CK values in association with non-specific tests for hepatocellular damage (AST, LDH) may indicate liver disease. Plasma CK values increase with muscle damage. CK elevations may be due to rough handling at the time of venipuncture and following the intramuscular injection of some chemotherapeutic agents, especially enrofloxacin.

The primary catabolic end product of protein, non-protein nitrogen and purines depends upon a reptile’s natural environment. Terrestrial reptiles excrete uric acid as the primary nitrogenous waste product (i.e. they are uricotelic). Uric acid is synthesised in the liver and excreted by renal tubular secretion. The blood level is therefore largely independent of urine flow rate (and is therefore not a sensitive indicator of dehydration in reptiles or birds). Both animal and environmental factors influence uric acid levels. The normal blood uric acid value for most reptiles is 0 to 600 µmol/l.

Plasma levels of uric acid increase with renal disease but this is neither a sensitive indicator of renal dysfunction, nor a specific indicator since physiological increases are common. Physiological high levels are seen in several species during hibernation, probably due to decreased tubular function at low temperatures. Healthy snakes should be resampled after a fast if a high uric acid level is seen. Increased uric acid levels are seen with gout and renal failure. The loss of about two thirds of the renal functional mass is necessary before uric acid increases and therefore rises late in the course of renal failure. Renal failure has been associated with nephrocalcinosis (associated with high dietary levels of calcium or hypervitaminosis D), visceral gout (caused by dehydration, renal failure or toxicosis) and nephrotoxic drugs (aminoglycosides can result in significant renal tubular necrosis).

The majority of the body’s calcium is stored in bone. Blood calcium levels are kept within a tight range by the actions of parathyroid hormone, calcitonin and vitamin D. Blood levels vary between species but generally range between 2–5 mmol/l.

Hypocalcaemia occurs with imbalances of calcium, phosphorus and vitamin D but by comparison to other reptiles this is relatively rare in snakes. Low calcium may be seen with renal failure. Female reptiles may have increased calcium levels of two to fourfold during times of reproductive activity. Mobilisation from bone results from increased oestrogen activity and calcium levels return to normal after egg laying. Persistently high calcium (and phosphorus) may be normal in indigo snakes. Iatrogenic hypercalcaemia has been reported in captive reptiles and results from excessive dietary or parenteral calcium and vitamin D. Primary hyperparathyroidism, pseudohyperparathyroidism and osteolytic bone lesions could also cause hypercalcaemia but are unlikely to be encountered. Hypercalcaemia may lead to nephrocalcinosis and renal failure.

The metabolism of phosphorus and its blood levels are closely linked to those of calcium. Most reptiles have a range between 1.0–3.0 mmol/l. Young, growing reptiles may have higher blood phosphorus levels than adults.

Amylase production and secretion is not restricted to the pancreas and may originate from several areas in the gastrointestinal tract of many reptiles. Amylase values vary between reptile species and individuals. Increased levels may be useful as a diagnostic indicator in some species but its value in snakes has to be shown.

Sodium, potassium and chloride levels are presently evaluated in a similar manner to mammals. There is a wide variation in normal levels among and within species. High potassium levels generally carry a poor prognosis.

Both animal and environmental factors affect levels. Animal factors include species and nutritional status, and environmental factors include ambient temperature and season. Response to environmental cues tends to be species-specific. Glucose values are generally between 3–16 mmol/l. Glucose values in reptiles are presently considered of limited value because any changes tend to be non-specific and not sensitive. For instance, hypoglycaemia has been associated with starvation, malnutrition, high protein diets, severe liver disease, endocrinopathies and septicaemia. Hypoglycaemia has also been reported to cause tremors, loss of righting reflex, torpor and non-responsive pupils in some reptiles. Other problems, such as hypocalcaemia, are far more common though. Hyperglycaemia may occur with iatrogenic glucocorticoid use or excess delivery of glucose. Diabetes mellitus should also be considered.

Lactate dehydrogenase (LDH) has a wide distribution in reptile tissues and elevations suggest tissue damage. In some species elevations over 1000 iu/l are considered significant. An increased value for LDH indicates tissue damage.