From WikiVet English
Monitor
Jump to navigation Jump to search

Monitors do not adapt to captivity well since they may require specialised diet and husbandry. The larger ones can be very dangerous. The giant species (Nile monitors (V. niloticus niloticus and V. n. ornatus), Salvador or crocodile monitor (V. salvadorii) and the water or Asian water monitor (V. salvator) need very large enclosures and have powerful crushing jaws and bites can result in very serious injuries. Adapting to captivity varies between species but most specimens are wild caught and mortality can be high. There is very little breeding achieved outside zoos and wildlife parks. 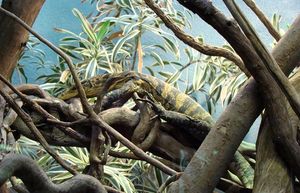 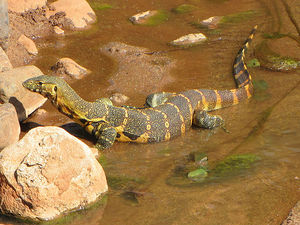 The Nile monitor grows to 2.1m, but averages 1.5-1.8m. It has a very aggressive temperament with a powerful bite and a lashing tail. The muscular limbs terminate in stout, sharp claws capable of ripping open sun-baked termite mounds in the wild.

Juveniles are brightly coloured, with a black background and intense yellow markings, including bands around the snout and a prominent post ocular stripe. The hatchlings are essentially arboreal during the first years during which time they hunt insects and other arthropods. At about 50cm in length they take on a more terrestrial existence taking regular forays into the water. The intense yellow coloration begins to fade and later large adults retain only pale remnants of the juvenile pattern. Juveniles have a characteristic attenuated snout, but as they grow older the snout becomes more box-like, growing blunt and high. Such modifications are functionally related to an increased diet of hard-shelled prey, such as crabs and snails, and the larger bones of medium sized mammals. Box-shaped skulls are characteristic of crushing jaw mechanisms such as seen in turtles and savannah monitors.

The Nile monitor is distributed across most of Africa, except the north-west. Usually found in association with bodies of fresh water.

Nile monitors are carnivores. In captivity, they can be fed crickets, mealworms, kingworms, waxworms, butterworms, rodents, and fish. The monitors may occasionally be fed cooked eggs, canned dog or monitor food, or raw beef heart. They should receive supplements.

This species is hardy in captivity when properly maintained but has a very aggressive temperament.

Small juveniles should be housed in at least a 90 litre vivarium. Due to their large size, adults will require custom-built quarters. Pine shavings, aspen bedding, or orchid bark can be used as a substrate. Landscape with rocks, driftwood, or hollow logs. A water dish large enough for the lizard to soak in should be used. Nile monitors have a tendency to defecate in the water dish so clean it whenever soiled or at least daily.

An under tank heater should be used for surface heat. An incandescent bulb in a reflector should be situated at one end of the vivarium to provide gradient daytime heat. At night, a red or black light bulb or ceramic infrared element may be used. Thermometers should be used to verify the temperature. The humidity should be moderate. Unfiltered natural sunlight is best, but fluorescent full spectrum / UV radiation reptile lights may be used. 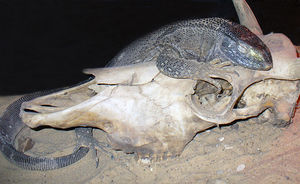 Averaging 1-1.2m in length, savannahs have a shorter snout and blunter face than the other monitors, and tend to be a dark or dusty grey with touches of rusty orange on scattered scales. The have long, blue forked tongue with are actively used in exploring their environment. Sexing monitors is difficult; their hemipenal retractor muscles are exceedingly strong thus difficult to evert, and there are no external characteristics to differentiate males from females. Ultrasonography is useful.

Savannahs come from hot, dry environments - the savannahs of central and sub-Sahara Africa.

A healthy savannah has a good appetite. Hatchlings can be started on crickets, earthworms, Zoophobias and pink mice. As they increase in size change to fuzzy mice. Only a small amount of high quality canned dog food can be offered on an occasional basis since too much may cause disease. Rodents should ultimately be the staple food source in your monitor's regular diet. Full-grown monitors will eat adult mice, small rats and small hamsters. Savannahs will easily eat pre-killed prey. Defrost and warm if feeding frozen prey. Juvenile/sub-adults (up to 1 m in length) should be fed one to four mice twice a week. Adults (> 1 m) can be fed twice a week, adjusted as necessary based on weight gain and amount of exercise. Obesity is a common problem.

Savannah monitors require a large enclosure, which needs to be cleaned frequently.

The walls, floor and ceiling need to be securely attached to each other.

A variety of substrates can be used including paper, Astroturf or indoor/outdoor carpeting.

Savannahs do enjoy soaking. Provide them with a water bowl or tub big enough for them to submerge themselves. They will drink their water, and may defecate in it, so the bowl must be checked at least once a day to keep it clean and filled.

During the day, temperatures should range from 29-32ºC. At night, it can drop to 24ºC. Heat should be provided in two ways: a subtank or sub-substrate heating pad under half the tank, and a basking area. Heat tapes, incandescent lights and ceramic-heating elements are all suitable for providing heat. Use the combination as necessary to maintain the proper temperature ranges day and night. Space heaters are also very suitable. 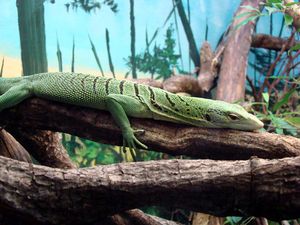