The structure of a nematode is intimately related to its function and its life cycle. Although there are common traits throughout the phylum there is also great diversity allowing each species to occupy a niche in which it may thrive.

The nematode body is cylindrical, elongated and smooth with no limbs protruding, such as is seen in the common garden worm though generally on a smaller scale. The body is contained within a tough elastic cuticle which in many species forms elaborate structures useful for identification. The presence of a cuticle is similar to the structure of arthropods, however unlike them the nematode cuticle is not chitinous but is comprised mainly of collagens. The cuticle is non-living, produced by cells of the epidermis in most of the worm, allowing it to grown between moults of the worm without the need for shedding, although this does occur a number of times during the development of most worms. It is permeable to allow ions and water to pass through and therefore plays a key role in maintaining the hydrostatic pressure, which in most nematodes is relatively high inside the worm. The cuticle also acts as an anchoring point during locomotion as a skeleton does in mammalian species.

Morphological differences in the cuticle are regularly used to identify different species of nematodes, though the functions of these are not all completely understood.

Locomotion in nematodes involves somatic muscles that are present below the cuticle and hypodermis. They are attached to the hypodermis and separated into four sections by hypodermal cords. They are obliquely striated unlike mammalian muscles and have dense bodies as opposed to Z disks. Two types of muscle arrangement occur in nematodes, platymyarian in small worms and coelomyarian in larger worms. During locomotion the muscles are used to apply pressure laterally to the cuticle, this pressure is opposed by the high hydrostatic pressure of the coelom and causes dorso-ventral bending. These muscular contractions cause the nematode moves in a 'sinusoidal' manner.

Knowledge of the nervous system employed by nematodes has enabled the development of many anti-parasitic drugs as they work to disrupt this system. There is a neural ring around the pharynx of the nematode containing 4 ganglia, sensory and motor neurones extend to the anterior of the worm to innervate the pharynx. One ventral and one dorsal nerve cord extend distally from the neural ring run down the length of the worm with the hypodermal cord, these are responsible for innervating body wall muscles.

The muscles involved in feeding respond to a range of neurotransmitters that can either be excitatory or inhibitory. The 5-HT neurotransmitter, also known as serotonin, stimulates rhythmical contractions of pharyngeal muscles required to generate the pharyngeal pumping action. The rate of pumping in the pharynx is regulated by the neurotransmitter Acetylcholine (ACh). The pharyngeal muscles are inhibited by the actions of Glutamate and GABA which bind to post synaptic receptors and cause hyperpolarisation of the post synaptic membrane. The hyperpolarisation results in inhibition of the muscle actions as a greater stimulatory effect is required to overcome this and depolarise the cell.

In locomotion both inhibitory and excitatory neurones play an important role in contracting and relaxing muscles to allow sinusoidal movement. Acetylcholine is responsible for excitation of muscles, leading to contraction. Contraction of the ventral body wall muscles causes bending of a section of the nematode dorsally, to allow this the muscles on the dorsal wall opposite must be relaxed. Relaxation of body wall muscles is brought about by the release of GABA from the pre-synaptic membrane, this prevent contraction and allows the body wall to bend. In this way the two neurotransmitters work as an antagonistic pair to bring about sinusoidal locomotion.

The pharynx is situated at the anterior end of the nematode and is used in feeding, often being embedded into the epidermis or blood vessels of the worms predilection site. There are a number of different mechanisms by which nematodes feed. Some nematodes will feed on the ingesta of the host or its secretions, whilst others will suck a 'plug' of mucosa into their buccal capsules, generating an ulcer. One of the most damaging ways in which nematodes feed is by burying deep into the mucosa and feeding directly on the hosts blood. The pharynx may be specialized depending on the predeliction site and food type that the nematode requires, many blood feeders have teeth or plates used for attachment. The pharynx has a radial muscle that is used in pumping food into the intestines. The food enters the buccal capsule the size and shape of which is characteristic in some species of nematode. Due to the high pressure levels in the nematode body cavity there is a one way valve between the oesophagus and intestines and food is pushed through this by peristaltic action of radial oesophageal muscles.

The intestines of nematodes are simple tubes, only a single cell thick. The number of cells can range from 10's to one million and can be used as an identifying feature in some species. The cells are lined with microvilli, similarly to those in the mammalian gut, which are used to provide surface area for the absorption of nutrients. Lipid globules are also stored within the intestinal lumen and can occupy up to 50% of its volume. Digestion occurs rapidly and faeces is expelled under pressure from the posterior of the nematode.

The reproductive systems are major organs of the nematodes and can occupy a large portion of the body cavity in males and females. There are many morphological and physiological differences between the species and so they are separated here.

Males are either monorchic (most secernentea) or diorchic (most Adenophera), with regards to the number of testis present. The testis are tubular structures lined with epithelium and glandular tissue, sperm are produced at the end and mature as they migrate towards the shared opening of the cloaca. Many males have paired chitinous protrusion from the cloaca known as spicules, these are used for attaching to a female during copulation. The spicules are easily seen under a microscope due to their chitinous structure and their position and shape may be used as an identifying feature. Sperm are ejaculated from the cloaca around the spicule, rather than through it. The sperm produced by nematodes is amoeboid and is very motile, employing the same locomotion mechanism as seen in amoeboid species.

One of the most distinctive features of some male nematodes is the presence of a copulatory bursa, seen in nematodes of the order Strongylida. Nematodes with a copulatory bursa are known as Bursate, whilst those without are non-bursate. This bursa is at the posterior end of the nematode and is formed from alae with laeral rays that are used for grasping onto the body of the female during copulation. 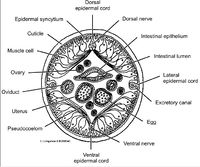 Cross section of a female nematode showing the position of the uterus - I. Livingsotne - BIODIDAC

Female nematodes usually have a single genital pore through which sperm may enter the uterus and oviduct, this pore is also referred to as a vulva and may be covered by a vulval flap. The uterus may take many forms form being short and straight, long with a single bend or a coiled form. Eggs produced in the ovaries populate the oviducts and uterus and may be released as embryonated or non embroynated eggs once fertilisation has occured. A small muscular organ exists at the vulval opening of some species known as the ovijector, this organ aids in the expulsion of eggs from the vulva. Unlike in male nematodes the end of the female is usually blunt ended with the anus being positioned proximally on the body wall.