The omasum is the third chamber in the ruminant stomach. It lies within the intrathoracic part of the abdomen so cannot be palpated manually. Instead it is examined by ausculation. The omasum has biphasic contractions which squeeze fluid out of the food before allowing the ingesta to continue into the abomasum. Absorption of volatile fatty acids continues in the omasum. 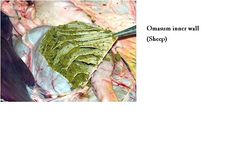 The omasum is right of the midline. The Rumen and reticulum are located to the left and the liver and body wall to the right. The omasum is covered by lesser omentum and is bilaterally flattened. It is located at ribs 8-11. The lower pole has an extensive connection to the fundic region of the abomasum. The omasal canal is formed between the end of the laminae and the omasal groove, part of the gastric groove between the cardia and the pyloric sphincter. The omasal canal passes between the reticulum and the abomasum. Its mucosa is smooth except for particularly large papillae around the reticulo-omasal opening. The omaso-abomasal opening is a large and oval, partly covered by overhanging abomasal folds.

There are numerous small lymph nodes that are scattered in the omasal curvatures. The lymph drains to larger atrial nodes between the cardia and the omasum, then to the cistera chyli. 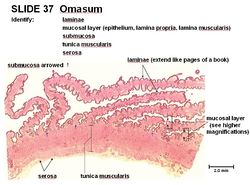 The omasum has a keratinised stratified squamous epithelium. It is firm in texture and can vary in size. Lamellae thrown into leaves divide the lumen into narrow and uniform recesses. It contains no glands.

The small ruminants have a smaller omasum, which is bean shaped.

The lower pole of the omasum contacts the abdominal floor below the costal arch.